IBM reported Q3 2019 revenue and earnings that failed to meet analyst revenue expectations. With a revenue of $18.03 billion, versus an expected $18.76 billion, this quarter marked the company’s twenty-seventh revenue decline under CEO Ginny Rommety. 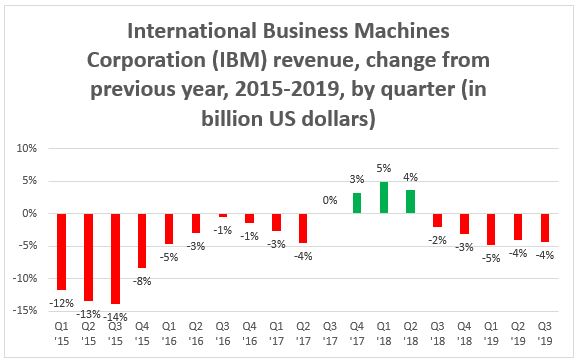 It is well known that IBM’s legacy businesses in the areas of IT outsourcing services and mainframe computing are in decline. Additionally, IBM has been shedding low-margin assets recently in an effort to raise cash and pivot more firmly to the areas of cognitive computing, or, as it is more commonly known, AI and cloud.

Some of the notable items emerging from the earnings transcript:

IBM is doubling – no, tripling – down on its move into the cloud space with a laser-like focus on enabling multi-cloud and hybrid cloud management (e.g. deploy, run, manage) for workloads based on Linux with containers and Kubernetes. Red Hat is the lynchpin for this effort, with the strategy hinging upon broad adoption of Red Hat Enterprise Linux (RHEL) and the hybrid cloud platform OpenShift.

The bet here is that IBM can combine Red Hat’s cutting-edge technology and leadership in this emerging space with Big Blue’s veteran sales and marketing expertise, along with its legacy systems technology and budding efforts in AI and security, to produce a compelling cloud management offering.

To meet this need, Red Hat has added 1,000 new employees over the past few months with stable employee attrition rates. Additionally, IBM is re-architecting its solutions with the introduction of Cloud Paks, which are containerized software solutions that incorporate RHEL and OpenShift.

IBM sees continued strength in its security portfolio, with strong performance and analyst ratings for threat protection products QRadar and X-Force Threat Management. IBM announced a project with the City of Los Angeles and the LA Cyber Lab to provide threat intelligence to local businesses. QRadar and X-Force Threat Management are also being coupled to tackle managed threat monitoring services in the cloud.

IBM continues to claim that organizations are “in the early phases of their journeys to modernize their infrastructures to deliver saving, productivity and innovation.” IBM uses this “early stage” claim as an anchor to position its own cloud services and cloud advisory services as the future. On one hand, IBM states it is expanding cloud availability zones and data centers and signing on new clients in highly regulated industries to be the preferred destination for mission-critical workloads. On the other hand, IBM acknowledges the low level of client consumption and as a result will focus on managing to margin, profit, and cash, while avoiding low-margin products and contracts. This does not inspire confidence in would-be customers who are seeking a cloud vendor that is taking a long-term holistic approach to the cloud market.

IBM has an uphill battle ahead of itself. Strictly speaking from a financial perspective, IBM is carrying $66 billion in debt and holds $11 billion in cash, generating about $12 billion in free cash flow over the previous TTM. This may demonstrate a solid balance sheet in current times; however, a macro-level recessionary event could be enough to place Big Blue in dire financial straits. On a positive note, IBM did reduce its debt by $7 billion during this past quarter and has made it a priority to reduce debt levels until it can achieve a low to mid-level “A” credit rating.

Of primary concern is that IBM has placed literally all its eggs into the Red Hat basket, but that basket was only generating $3.4 billion in revenue as of 2018, pre-acquisition. IBM is claiming a normalized growth rate of 20% in Red Hat revenues post-acquisition; however, Red Hat was already growing at rates of 14-18% before being acquired. Considering IBM’s annual revenues are about $77 billion it is going to take a lot more than Red Hat growing at 20% to move the needle in a meaningful manner.

Acknowledging that IBM is likely correct in its market assessment with customers’ interest in both hybrid and multi-cloud enablement and management forming the next leg of cloud growth, it must be noted it is not the only game in town. In fact, Google Cloud Platform (GCP) is moving quickly to cement partnerships with key vendors such as SAP, VMWare and others to implement the framework enabling this shift, and all without IBM’s complex and expensive licensing models. Amazon’s AWS, Microsoft’s Azure, and VMWare are all doing the same as well.

Stackify has changed the pricing model for its APM tool, Retrace. This change in pricing is in line with usage-based shifts in technology along with changing architectures.

Tenable Chosen as the Successor for BeyondTrust’s Vulnerability Management Suite; BeyondTrust Steps Aside

Announced on December 31, 2019, BeyondTrust named Tenable as the successor to its Vulnerability Management suite.

Dynatrace has filed for an IPO. IT professionals making APM purchasing decisions may benefit from the increased transparency when Dynatrace goes public.

Yes, You Should Do APM. Yes, It’s Getting Harder.

Application performance management (APM) is hard, but necessary. The vendor space is expanding because it addresses a real need.