IT automation vendor Ayehu has enabled users to create custom activities in its latest release, Ayehu 1.5 NG. This marks a significant shift in Ayehu’s product strategy.

Ayehu NG is an IT automation tool that allows users to create event-driven or scheduled automated workflows. The tool integrates natively with many solutions via built-in APIs and touts the ability to integrate with “anything with an API.”

Tool administrators drag and drop activities onto a canvas to create automated workflows based on the business logic, which Ayehu executes upon defined schedules or defined triggers in the IT environment.

Prior to the current version, Ayehu users were limited to a robust set of prebuilt activities that they could arrange into workflows. In the latest release, users can now create custom activities using the Activity Designer, which supports Python, C#, and Microsoft .NET.

This allows users to build activities for automation on their legacy systems or for their own proprietary or in-house applications. 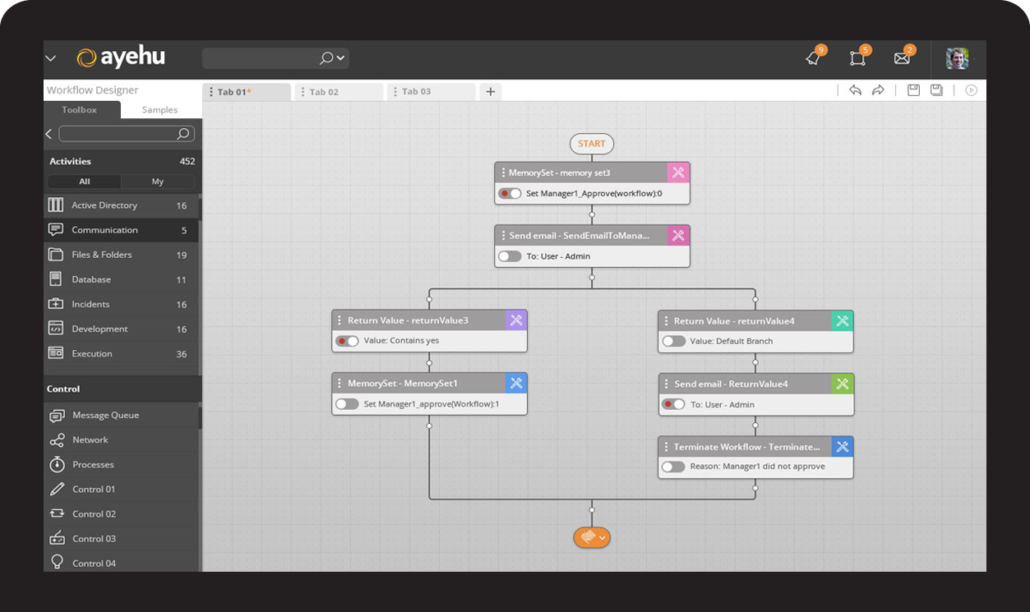 Ayehu’s addition of custom activities marks a significant shift in its product strategy.

A key aspect of Ayehu’s value proposition has been that the tool is codeless, so users can derive value without requiring development expertise.

By adding the capability for users to create custom activities, Ayehu has shifted its focus toward being the “single pane of glass” for orchestrating automation across the enterprise.

Because Ayehu’s prebuilt activities simply can’t cover everything, users of previous versions with in-house or legacy applications would have to rely on other solutions for automation for some applications, leading to a bifurcated approach.

Support for coding your own activities through the Activity Designer removes that impediment, allowing Ayehu to serve as that single pane of glass in an important segment – large enterprises with many legacy apps.

Ayehu is still likely to emphasize its user-friendly and codeless approach, where many activities and workflows can run out of the box, but the release of Activity Designer indicates an important shift.

Ayehu is no longer focusing on just being the most user-friendly, out-of-the-box solution – instead, Ayehu wants to be the tool to automate anything and to provide more appeal to IT professionals who prefer a do-it-yourself approach.

Tools Are Easy, Process Is Hard – Ayehu’s IT Automation Solution