On March 3, Ayehu announced that it would be joining Automation Anywhere’s Technology Alliance Program, which will develop integration between the two vendors’ solutions.

Ayehu is the provider of Ayehu NG, a no-code IT automation tool that allows users to create automated event-driven workflows by dragging and dropping pre-built activities into a process flow.

Ayehu NG integrates with other systems through APIs, for example, allowing an alert from a monitoring tool to create a ticket in the ITSM tool, and for automated resolution with an IT operations tool, all in a single workflow.

Robotic process automation, including solutions provided by Automation Anywhere, works much differently. Rather than integrating systems through APIs, RPA is a way of automating tasks through a program’s graphical user interface (GUI).

In other words, when implementing RPA, a “bot” performs exactly the actions a human operator would normally perform: clicking on checkboxes, typing text into fields, and so forth. RPA is typically used for business-facing systems, unlike Ayehu’s IT automation software, which often controls back-end systems and performs inputs through an API call or a command line interface (CLI) rather than a GUI. 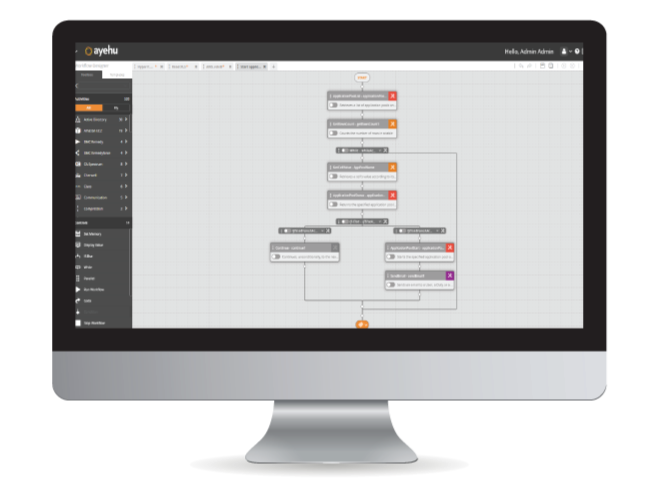 Griffin Pickard, Director of Automation Anywere’s Technology Alliance Program, sums up the strengths of this approach:

“Many common tasks have both a user-facing, business-focused component as well as a backend infrastructure. Our partnership integrates two ‘best of breed’ solutions that together provide a complete end-to-end intelligent automation solution.”

Putting RPA on the front end has the potential to simplify the implementation of many workflows and increase the speed at which automation solutions can be implemented because RPA requires less of a change to existing business processes and less coding to roll out.

Putting an API-integrated tool on the back end of RPA greatly expands the enterprise’s automation capabilities, because then users are no longer limited by the native integrations of the system with the GUI. This partnership makes perfect sense, as RPA and IT automation tools normally do not compete with each other but perform complementary functions that can benefit from effective integration.

Tools Are Easy, Process Is Hard – Ayehu’s IT Automation Solution

DRYiCE: RunBook Automation That Could Possibly Change the World

The growth of AI and workflow automation is crucial to the success of any digital transformation strategy. Learn how DRYiCE's iAutomate can help provide "zero-touch" automation.

FPT akaBot Positions Itself as a Notable RPA Competitor

Robotic process automation (RPA) became a forefront initiative for many organizations looking to streamline and automate business operations. FPT akaBot emerged as a notable solution consideration among the traditional big players in the RPA space.