SAP customers have become accustomed to the annual announcements around the recent enhancements and new functionality releases for SAP’s S/4HANA product. The reality is that S/4HANA adoption is not quite moving the revenue and growth needle for SAP in spite of SAP founder Hasso Plattner’s stating in 2015, “…If this doesn’t work, we’re dead. Flat out dead.” SAP frequently touts the growing number of customers that have signed up for S/4HANA; however, the reality is that many of these transactions are for a small sliver of S/4HANA functionality and/or are paper transactions being leveraged by buyers to obtain more attractive terms and relief on legacy SAP support and maintenance fees.

Meanwhile, companies like Salesforce.com have released massively aggressive growth goals to move their business from $10B/year to $20B/year over the course of the next three years and $60B by 2034! Compare that to SAP’s 2017 revenue of $23B and realize it took SAP from 2007 to 2015 to eclipse the $20B mark. I think it is safe to say that SAP has finally awoken to the reality that Salesforce.com is eventually going to be everyone’s competitor, even in the walled gardens of the ERP universe.

Considering that the CRM market is set to double in size from 2016-2021 to $66B/year, while the traditional ERP market will be growing at a much slower pace (estimated to grow to ~$39B/year), this is the year SAP has chosen to respond to the Salesforce threat. And they have made nothing short of a massive claim to take over the number one spot in the CRM space from the king of CRM! Just how big of a claim is this? Let’s consider the current market share for vendors in the CRM market: 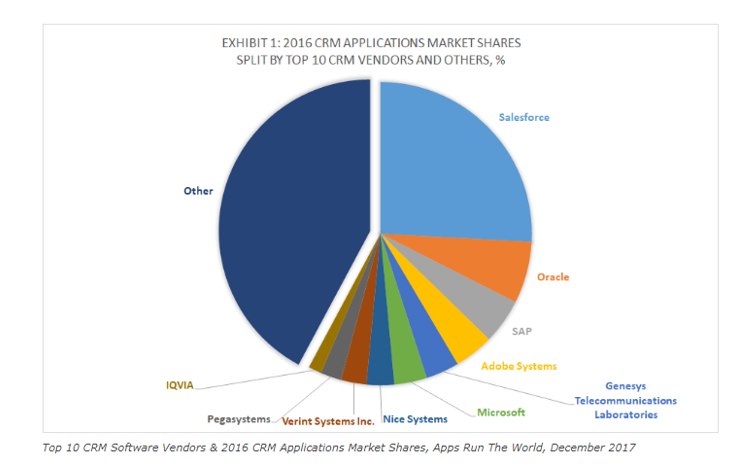 Salesforce.com currently holds a 26% market share in the CRM market and is growing this business at a compound annual growth rate of 21%. SAP ranks third in market share at 4.8%, so the claim to move to number one in this space is a bold one, and likely to ring flat with customers and analysts alike. It is likely a goal of SAP to seek out new CRM clients by taking away market share from many of the smaller players in this heavily segmented space, combined with displacing Salesforce with larger, heavily committed SAP ERP clients.

SAP’s approach is more of a re-packaging and deployment strategy of existing functionality, coupled with a modern focus on the development of micro-services across the newest releases of SAP software. Traditionally, we have come to think of core ERP functions as a “back office” system of record transactions while customer facing transactions related to CRM, marketing, and commerce are characterized as “front office.” As issues regularly arise when data must be seamlessly integrated between back office and front office systems, especially when these systems are sourced from different vendors, SAP has identified the linkage of data as the key differentiator upon which they can build the next generation CRM capability.

To address this issue, SAP has announced their “Connected Enterprise” strategy which seeks to seamlessly integrate all functions of the business and customers’ interactions within a single SAP environment. This product suite is called C4/HANA and is slated for release in 2019. Enablement of connected data sources will occur via the recently announced SAP HANA Data Management Suite, which is really the amalgamation of using the HANA in-memory database in conjunction with the already existing SAP Data Hub, with the re-branding to the new name. The major shift in mindset and engineering approach from SAP aims to share data between functions within the ERP system rather than simply exchange data between isolated areas where the data is utilized in a silo, often from Best of Breed (BoB) third-party applications. It is through this data sharing paradigm shift that SAP expects to merge information from the front and back office systems, setting a high standard for speed and analytics capabilities that will power the game changing capabilities claimed to be forthcoming in C/4HANA.

Why Is This Happening Now?

Is SAP too late? It was just recently announced that Salesforce.com has completed the acquisition of MuleSoft in a blockbuster $6.5B transaction. Mulesoft is widely acknowledged as a leader in the integration and API management space with their slogan being, “Connect anything, change everything” for their Anypoint platform, likely to be re-named Integration Cloud by Salesforce. While Salesforce paid a premium to acquire Mulesoft, it carries a robust and customer friendly integration and API management platform which fits neatly into the Salesforce.com platform strategy. Salesforce.com is building out a platform-based environment with their own version of the connected enterprise based on the ability to service many-to-many connection points of data interchange, both within the Salesforce eco-system and to data sources external as well.

I mentioned earlier in this note that adoption of SAP’s S/4HANA product has not met expectations in terms of becoming the driving transformational force for SAP. Given the much higher growth rates in the CRM markets (vs. ERP markets), SAP recognizes that it is approaching a moment of truth where the legacy investments in HANA database and S/4HANA need to start paying off for their customers, not to mention shareholders. To be fair, SAP has not been standing still all this time, and has combatted these headwinds through a cloud acquisition strategy that has been aggressive, shrewd, and massive in scale.

As it pertains to SAP’s vision of taking over the number one CRM spot, SAP has recently acquired cloud native companies Hybris (web commerce), Gigya (IAM), and CallidusCloud (Sales Enablement), which are being integrated with existing SAP assets such as CRM and Billing and Revenue Innovation Management (BRIM) to be the foundations of C4/HANA. In fact, total acquisition costs by SAP since 2011 total over $20B, while overall revenues have increased from ~$14B in 2011 to over $20B in 2017, showing that the “cloud capture” strategy has bought time and runway for SAP’s grand HANA vision to play out.

Many Challenges and Pitfalls Await SAP on the Road to HANA

Requires a migration to S4/HANA

In order for SAP’s customers to ever see the value of the C4/HANA solution they will have to first migrate to or establish S4/HANA. S4 only runs on HANA (per SAP policy and design) and therefore ensures that all S4 implementations are also a displacement for legacy database vendors Microsoft, Oracle, and IBM. The road to S4/HANA is not an easy upgrade for legacy SAP ERP clients. It requires more of a re-platform effort than anything akin to a major software update. This results in the new S/4HANA increasing the complexity of the system when modifications are required to various system functions, as S/4 presents an additional layer, a database views layer of code that links back to the underlying business logic from the legacy SAP ECC system.

Competition between CRM vendors is ferocious

Salesforce.com has been discussed to some extent in an earlier section; however, it bears repeating that they are the CRM juggernaut bar none. Clocking in with a 25.9% market share and $6.6B in application revenues in 2016 and growing at a ~21% YoY rate, it is going to be hard for anyone to catch up. In fact, the market share numbers literally fall off the side of a cliff for competitors #2-6: 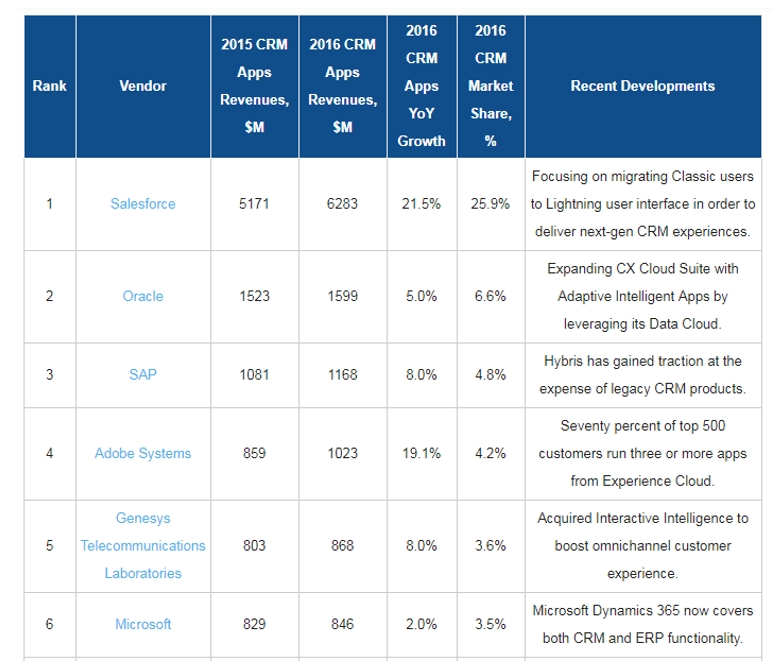 With Salesforce.com and Adobe the only vendors with double digit annual growth in the CRM sector, it is difficult to see how SAP will be able to muster enough momentum to even move up in the market share rankings, much less threaten the number one position any time in the next few years. In fact, SAP has essentially “doubled-downed” on C/4 being a revolutionary and transformational technology which can dislodge incumbents from solutions that may be working quite well.

As an additional headwind, SAP just completed the Callidus Cloud acquisition in April 2018. It is inconceivable that there could be any meaningful integration work done, to date, between Callidus, SAP CRM, Gigya, and Hybris, which is to say that SAP is really betting its future on development work that has not been delivered.This is new ground for SAP in the sense that truly integrating cloud companies within the SAP eco-system has not been a key focus area. Instead, the strategy to date has been to acquire solid, stand-alone cloud companies to fill in gaps not addressed by the legacy on-premises SAP ERP solutions. Incorporating the code base into the new HANA core is greenfield territory for SAP!

SAP Still Holds the “Compliance Trick” up Their Sleeve

SAP and Oracle both share a similar characteristic across their collective customer bases. Namely, each has a massive install base of existing customers where their business is literally dependent on these software providers. SAP has worked diligently over the past year to establish the legal legitimacy of the licensing notion of Indirect Access, achieving a landmark court victory against Diageo and a judgement in the amount of 70M pounds in the UK and settling a $600M claim with InBev for an undisclosed sum.

SAP’s customer base has mounted a resistance movement as a result of these recent license compliance issues, to which SAP has responded with a new pricing model, termed Digital Access, that potentially removes the ambiguities around Indirect Access scenarios and adds to licensing revenues. However, the path from status quo to the new Digital Access model is far from clear in terms of which option will provide the most long-term ROI.Digital Access licensing via SAP will be covered in a future note.

SAP is de-coupling the sales function from the compliance function, creating a brand new and formalized compliance department. So, while those companies on the cutting edge of software deployment like Adobe are dismantling their compliance teams, SAP is just now building one! This should not be taken lightly by SAP customers. Chances are you are going to be audited, and it is likely that non-compliance incidents will be used as leverage to elicit cloud and subscription purchases, even if in name only!