Home > Research > Is Oracle Finally Poised to Catch up in the Cloud?

Oracle Corporation is undeniably one of the most important enterprise software vendors in the world. The one area that Oracle has seemingly neglected over the past decade is the explosive emergence of the cloud and the dizzying array of XaaS offerings from the leading vendors in this market. Neglected until now.

With annual revenues of close to $40B, with a clear leadership position in the commercial database segment as well as healthy market share in the ERP application market, it is safe to say that Oracle is a cornerstone component for many businesses and their IT departments. Yet Oracle barely merits its own breakout of cloud market share as evidenced by Synergy Research Group’s Q3 2017 cloud market share report: 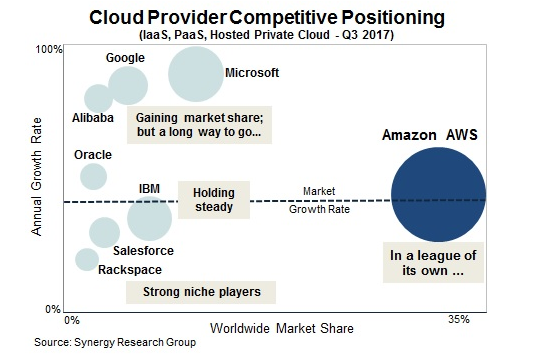 But to hear Larry speak about cloud at OpenWorld, and specifically targeting AWS, you wouldn’t know that Oracle is but one of many cloud service providers lumped into the “other” category! However, a direct comparison between the current cloud leaders and Oracle may obfuscate the underlying strategy that Oracle is systematically bringing to bear on the marketplace.

One must deconstruct the cloud businesses of Amazon.com and Microsoft to break through the high-level market share numbers and truly understand the focus of these companies. AWS is the clear juggernaut in the IaaS space, for example, yet is not a meaningful player at all in the SaaS segment where a “born in the cloud” company like Salesforce.com (CRM) is the clear leader. Microsoft, on the other hand, is tearing it up in both the SaaS space with O365 and Dynamics as well as the IaaS segment with Azure. So where does this leave Oracle?

I don’t buy the line that Oracle missed the cloud boat. In fact, the business practices that have propelled Oracle to be one of the most successful and profitable companies in tech may have served to hold it back and impede its desire to move to the cloud more quickly than it has to date.

As a point of reference, Oracle has made over 120 acquisitions across all manner of technology and industry verticals. And while Oracle moves at lightning speed to incorporate these companies into the Oracle business model and licensing schema, it is not nearly as nimble when it comes to integrating the acquired technology into the Oracle tech stack – to the chagrin of many of the acquired companies’ customer bases.

While the pathway to the IaaS space is a greenfield endeavor for Oracle – requiring significant data center, R&D, and operational investment – the path to SaaS and PaaS requires the porting of legacy solutions to a cloud architecture, along with net-new functionality to attract customers to the more expensive, recurring revenue consumption model. Oracle claims to have been working for years on rationalizing its legacy ERP applications to be cloud ready under the Oracle Fusion product line, along with re-writing the Oracle database software to be optimized for cloud environments.

This technical debt has caused Oracle to lag behind its peers in the cloud revolution that is engulfing IT shops globally. In fact, many clients have expressed their frustration with being sandwiched between Oracle’s hyper-aggressive sales tactics pushing them to adopt cloud solutions, yet their inability to demonstrate feature/functionality parity with legacy Oracle on-premises solutions. This tide may finally be starting to turn in Oracle’s favor, at least as it applies to Oracle’s core database technology and its ERP SaaS offerings. In fact, Oracle has landed a mega-fish in its recent cloud deal with AT&T.

Oracle has clearly bought in to the cloud eco-system as being the future for the company, but it will not move haphazardly to the cloud at the expense of current revenue streams and its profitable support and maintenance business. To this end, Oracle is seeking to preserve the license support model while simultaneously coupling sales of new cloud services alongside perpetual license agreements.

Oracle’s recent sales tactics also indicate that the overarching goal is to ensure that Oracle can own, as much as possible, its customers’ operating environments on premises as well as in the private, hybrid, and public cloud environments.

One tool Oracle has employed to help drive cloud adoption is its bring-your-own-license (BYOL) program whereby Oracle customers can re-assign existing perpetual licenses to the Oracle PaaS cloud. While the details on this program are still sparse, one component that has emerged is that customers must maintain an active Oracle support agreement in order to maintain the “cloud eligibility” for these perpetual licenses to be used in the cloud.

Oracle has also announced the release of “Universal Credits” whereby customers can define a payment threshold or capacity and allocate the universal credits against any of Oracle’s cloud services, an effort to simplify the ease of transacting on the Oracle Cloud.

To provide some financial perspective, Oracle’s cloud revenues are becoming quite a significant portion of the business overall. Based on Oracle’s fiscal Q2 FY2018 earnings report:

In terms of growth, Oracle is projecting total revenues to grow between 2-4% with cloud revenues growing between 21-25% for Q3 FY18, ending in February 2018. While a fraction of AWS’s $4.5B Q3 FY17 revenue and Microsoft’s $5B Q1 FY18 in commercial cloud revenue, it is the fastest growing cloud company according to Apps Run The World data (albeit starting from a smaller base).

Oracle has made significant headway in finally bringing the Oracle SaaS applications and Oracle database offerings to an equal footing with its legacy, on-premises predecessors. Towards that end, I have itemized some of the promising takeaways that Oracle has recently announced.

While these options definitely will lead to a top-notch and advanced public cloud option, it will likely be expensive at scale. Organizations will have to apply due diligence when comparing cloud workloads, cost, and performance requirements when choosing an IaaS option.

While extensive, the list above really is the tip of the proverbial iceberg when it comes to a seemingly resurgent Oracle. While more than a little overdue, Oracle seems to be using its late start to its advantage. Oracle has the benefit of taking a “clean slate” approach, which has enabled the development of a fresh and current cloud architecture that takes advantage of all its strengths (e.g. Exadata hardware, recruiting from a robust competitor talent pool, best-in-class database and incorporation of the newest trends in serverless and AI).

The reality is that most Oracle shops don’t really have the option of moving off Oracle and the current options for running Oracle applications and database instances in either a private cloud or via an AWS or Azure public cloud are ripe with both technical and licensing-related challenges. Oracle’s surge in the cloud space will be reassuring to this massive customer base that a path forward into the cloud may be a reality with Oracle.

Own the Cloud: Strategy and Action Plan

Craft a Cloud Strategy for the Enterprise Database