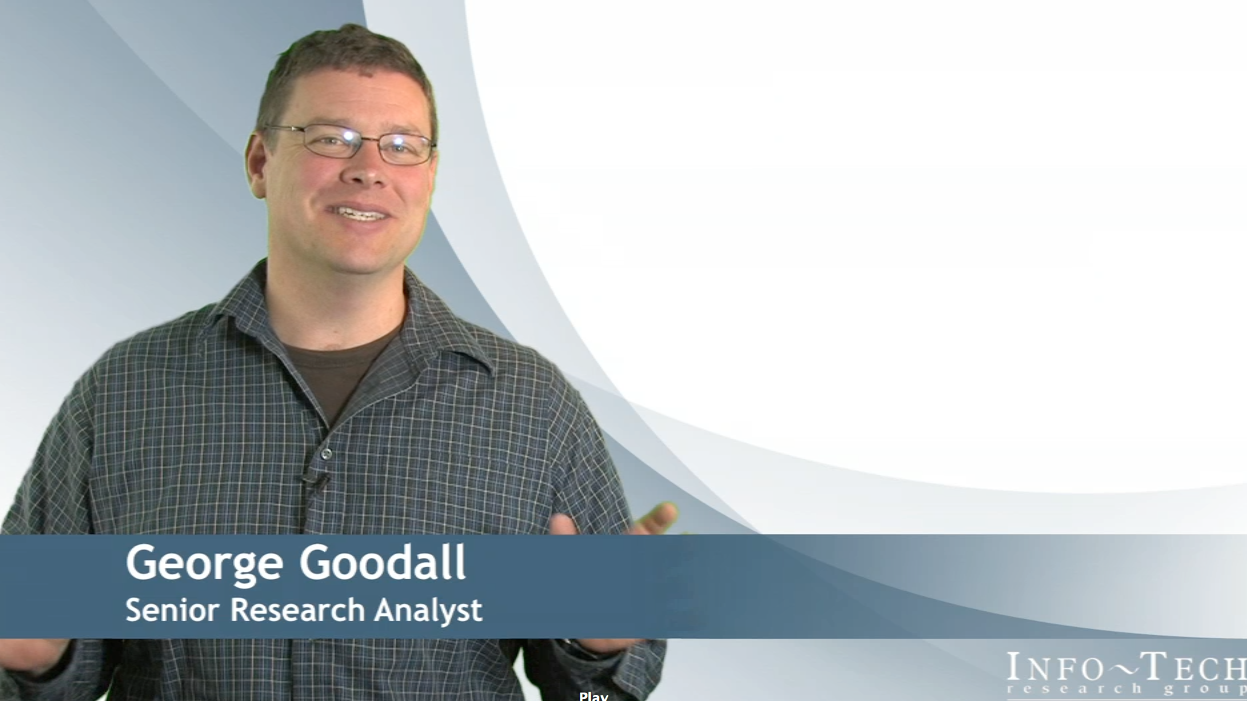 SaaS ERP belongs on the shortlist for small enterprises and mid-sized divisions of larger enterprises. Make the business case on versatility, not on total cost.

Software-as-a-Service (SaaS) ERP has come of age. Offerings from specialists like NetSuite, Plex, and Aplicor now have to share the space with Oracle and SAP. The interest in these products is increasing as evidenced by the selection shortlists reviewed by Info-Tech.

This note addresses the key questions that clients ask about SaaS ERP:

SaaS ERP is not for everyone, but it does present a compelling business case for many enterprises within the Info-Tech community.

Software-as-a-Service (SaaS) ERP is becoming increasingly common, at least on selection shortlists. Info-Tech estimates that SaaS ERP accounts for less than 3% of the ERP market, but its market share will increase dramatically in the near future.

In the last year, the names of SaaS ERP vendors have appeared in almost every ERP shortlist that Info-Tech reviewed. This trend – combined with recent developments from Oracle, SAP, and others – suggests that everyone in the ERP market must at least consider a SaaS option.

What It Is & How It Works

The popularity of SaaS is increasing rapidly. Customers are drawn by a perceived ease of implementation and maintenance, and low cost of acquisition. SaaS-based enterprise applications have already demonstrated their value for both Customer Relationship Management (CRM) and Human Capital Management (HCM). ERP, however, is a different game.

Most ERP deployments follow the traditional model: licensed software deployed on-premise to hardware managed by the IT department. SaaS ERP is different in terms of both licensing and deployment. Enterprises typically pay monthly per-user fees to access software that is hosted externally. From the vendor perspective, SaaS ERP involves only a single instance of the software that is partitioned across different clients.

The customers gain by reducing the burden of software maintenance and steep up-front capital costs. The vendor maintains only a single instance of the software, greatly facilitating software upgrades and reducing the need for redundant licenses for operating systems and databases.

Intended for Divisions and Small Enterprises

The most obvious target market for SaaS ERP is small and mid-sized enterprises that don’t have the need for large implementations. This niche has been most commonly filled by offerings from vendors like Intuit, Microsoft Dynamics, and Sage.

Another market exists for divisions of much larger enterprises. These divisions use a SaaS solution for their local operations and regularly synch to the parent’s ERP system, often from SAP or Oracle.

SaaS ERP has also emerged as a popular choice among enterprises that are experiencing corporate challenges such as divestiture or bankruptcy. For example, a recently divested division might turn to a SaaS ERP solution due to its relatively low upfront costs. Similarly, enterprises that have had to freeze ERP investment due to bankruptcy may turn to SaaS ERP.

The Benefits Come from Speed and Flexibility

Cost is one of the most attractive elements of SaaS ERP. Many clients have seen the appeal of replacing a large upfront investment in licenses with a series of ongoing monthly payments. Note, however, that this benefit may be illusory. Many SaaS vendors actually bill annually and negotiate for five-year terms, thereby limiting some of the perceived advantage. Regardless, some CIOs appreciate that SaaS maintenance is addressed as part of their ongoing operational budget rather than a cyclical process of escalating capital requests for ERP upgrades.

Another benefit is speed of implementation. The configuration and installation requirements of a SaaS ERP solution are considerably less than similar on-premise deployments. There are, however, certain costs that exist regardless of the deployment. SaaS, for example, won’t save costs for data migration, the implementation of business logic, or the training of users.

Perhaps the most under-reported benefit is the improvement in data management. Many ERP implementations, particularly those in multi-site environments, are plagued by data management issues due to the diversity of discrete systems. Since SaaS involves a single underlying database, many of the integration problems are moderated.

There Are Still Challenges

SaaS ERP is not the panacea that many hoped it would be. The biggest problem, ironically, is cost. The TCO of SaaS ERP typically reaches parity with on-premise solutions in year 4, so ongoing investment can appear expensive. This situation became apparent during the economic downturn. Enterprises with on-premise solutions were able to terminate maintenance contracts and defer upgrades in an effort to save capital. The SaaS ERP vendors were able to hold their customer’s data hostage. Use Info-Tech’s On-Demand vs. On-Premises TCO Calculator to make appropriate decisions regarding cost trade-offs.

Another crucial concern is service delivery. Most of the SaaS ERP vendors have good records with respect to uptime and most promise SLAs of 99.5% uptime. The recent major service outage at Amazon, however, has increased awareness of the probability of outages due to human failure. We should note, though, that most SaaS providers can deliver higher SLAs for availability than internal IT departments.

Enterprises need to establish appropriate SLAs to meet the needs of their business. Furthermore, these SLAs must be monitored and maintained. For additional guidance on establishing and maintaining SLAs, see Info-Tech’s solution set, Develop a Data Center Infrastructure SLA.

Perhaps a greater concern with service is where the data is stored. Most SaaS ERP providers host their offerings from a single geo-political territory, typically the United States. This situation introduces the possibility for trans-border data flow concerns, particularly for Canadian and European enterprises.

The final major concern is system integration and access. ERP systems often rely on integration with other enterprise applications. This situation is particularly acute for SaaS ERP vendors that typically offer only a narrow range of functionality. For example, a manufacturer may rely on a SaaS product for core financials but will need to incorporate workarounds to include planning or inventory information.

The integration problem also extends to core IT management systems. Enterprises must consider, for example, how to integrate with both the e-mail system and with authentication services. IT leaders may be able to depend on other SaaS solutions to bridge this gap. Okta, for example, integrates enterprise authentication with all of the SaaS applications to which a particular enterprise subscribes.

System integration also includes issues of data integration. Many rapid SaaS implementations are attained by minimizing effort on data migration and quality control. This option is particularly attractive to enterprises that have recently restructured. The lack of data, however, leads to challenges with reporting and demonstrating the value of the implementation. This constraint can in turn compromise end-user adoption. Info-Tech recommends migrating at least one year of operational data and five years of summary data into a new SaaS ERP deployment.

There are a variety of different SaaS ERP options:

Some enterprises only require the core financial capabilities of an ERP system. A variety of vendors can deliver AP, AR, and GL capabilities. This list includes FinancialForce (a joint venture of UNIT4 and Salesforce.com), Intacct, and – for very small businesses – FreeAgent and Xero.

The SaaS ERP space is expanding. A number of vendors have recently introduced products. Oracle, for example, recently announced the availability of its long-awaited Oracle Fusion Applications. These SaaS-based solutions provide both an upgrade patch for existing PeopleSoft and JD Edwards customers and cross-sell opportunities for new functionality.

Another emerging vendor is Workday. It was founded by David Duffield, the founder of PeopleSoft, and has delivered HCM products to a number of clients. It also offers financial management solutions, but it has not yet begun to appear on the shortlists that Info-Tech reviews.

Traditional Offerings in a SaaS Skin

Epicor announced Epicor Express in May 2010. It is a derivative of Epicor 9 intended for discrete manufacturing and job shops. It is available to customers as a hosted option direct from Epicor or from resellers via Microsoft’s Azure platform. It is not a true multi-tenant application but that distinction might not be evident to end users.

Infor has an offering that competes directly with Epicor Express. It offers SyteLine via its Infor24 Cloud initiative. As with Epicor, it is hosted on Windows Microsoft Azure.

SaaS ERP belongs on the shortlist for small enterprises and mid-sized divisions of larger enterprises. Make the business case on versatility, not on total cost.