Transparency, explainability, and trust are pressing issues in artificial intelligence (AI) and machine leaning (ML) today. Nobody wants to find themselves at the receiving end of a black box system that makes consequential decisions about (for example) jobs, healthcare, and citizenship, especially if those decisions are unfair, biased, or just not in one’s favor. And most organizations agree that consumer trust and confidence in AI being used ethically and transparently are key to unlocking its true potential.

And while there are literally hundreds of documents describing and prescribing AI principles, frameworks, and other good guidelines, there haven’t been any practical tools that could help with implementing transparency. Until now.

On September 28, 2020, the cities of Helsinki and Amsterdam jointly announced the launch of their public AI registers. The two registers were developed in collaboration with Saidot.ai, an innovative Finnish company which specializes in bringing transparency to consumer services and which, to my knowledge, is the only vendor in this space.

The idea for the company grew from the personal frustration of Saidot’s founder and CEO Meeri Haataja, who was “seeing how important transparency of AI is for the future of each one of us, and not being able to find too many meaningful ways to act on it.”

What Is an AI Register? 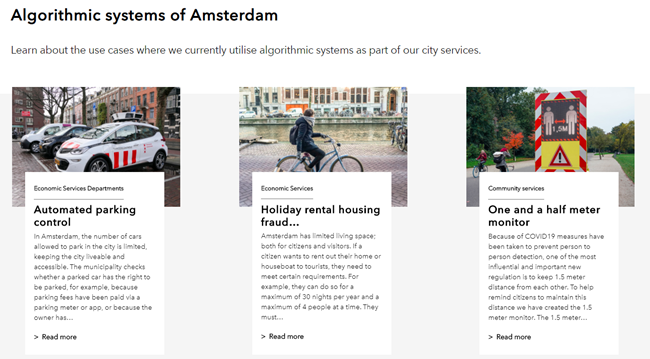 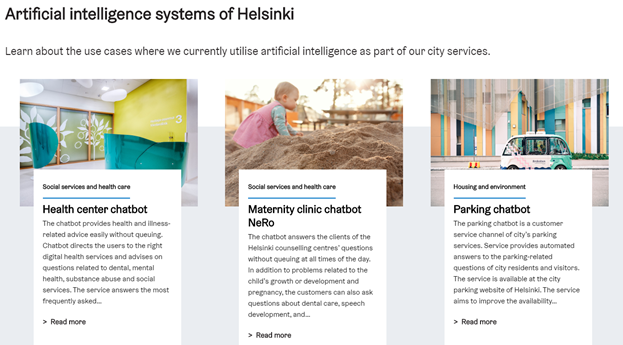 The registers also include contact information for further inquiries or to provide feedback, as seen in this screenshot from the City of Amsterdam: 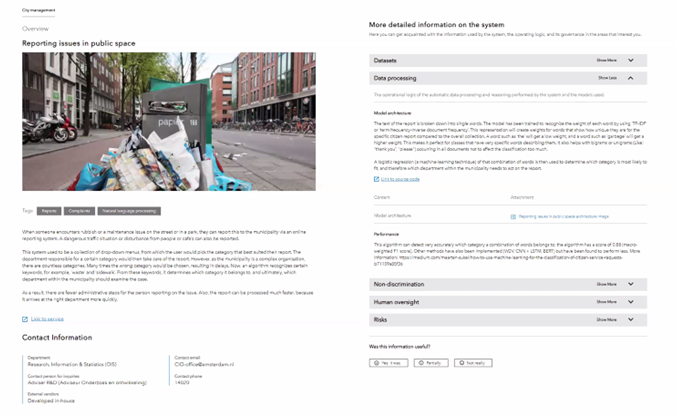 
The language used in these AI registers is clear and easy to understand, aimed at average citizens without any technical background in AI/ML. (Some technical information is provided as well; while it is limited, one could probably obtain more via the contacts mentioned above.)

So far only a small number of AI applications have been documented in the city registers – five by the City of Helsinki and four by the City of Amsterdam – but more are in the works.

Benefits of AI Registers for Governments and Citizens

By disclosing information about their apps, governments improve transparency and accountability around their use of AI. This helps to increase citizen trust, and trust is the foundation of any government. “The government can only function when there is trust between the government and people,” says this whitepaper from Saidot.ai. Or, as the City of Helsinki’s Chief Digital Officer Mikko Rusama says, “Without trust, there is no use for AI.”

For citizens, AI registers help to increase their AI/ML literacy. They promote citizens’ awareness of and participation in public debate – one of the cornerstones of democratic governments. They build trust by increasing transparency in how, where, and why the government uses their data, taxpayer money, and new technologies such AI/ML.

Ultimately, what we all want is responsible AI benefits all of us, respects diversity and human rights, encourages human flourishing, sustains human agency, and promotes societal, economic, and environmental sustainability.

For AI teams, AI registers offer a mechanism to “standardize transparency across your AI portfolio” – a “searchable and archivable way to document the decisions and assumptions that were made in the process of developing, implementing, managing, and ultimately dismantling an algorithm,” according to this whitepaper from Saidot.ai. Saidot’s software comes with“pre-defined modular metadata models which are adaptable to organization and sector-specific requirements, while securing interoperability between different versions.” Its offering consists of a backend platform, the register itself, and an interface for publishing the registers (which the company hosts).


In addition to the cities of Amsterdam and Helsinki, the company lists Finnair, the City of Espoo, as well as Finland’s Ministry of Finance, Social Insurance Institute, and Ministry of Justice among its customers and partners.

Beyond Government: Why You Should Adopt AI Registers for Your AI/ML and Data Science Apps

Trust is not just a fundamental prerequisite for a government to exist. Trust is equally fundamental in business. The entire reason your organization exists is because of your customers, consumers, employees, and partners. Whether you are just getting your feet wet with AI/ML or are running your whole business on a foundation of AI/ML, follow Amsterdam’s and Helsinki’s examples. Document, make public, and/or share with employees and partners what your organization is using AI/ML and data science for and how. We’ll all benefit from this disclosure. And the AI register software from Saidot has just made implementing transparency much, much easier.

To learn more about AI registers and Saidot’s platform: