Unlock Why EHR Solutions Are Not Being Adopted by End Users 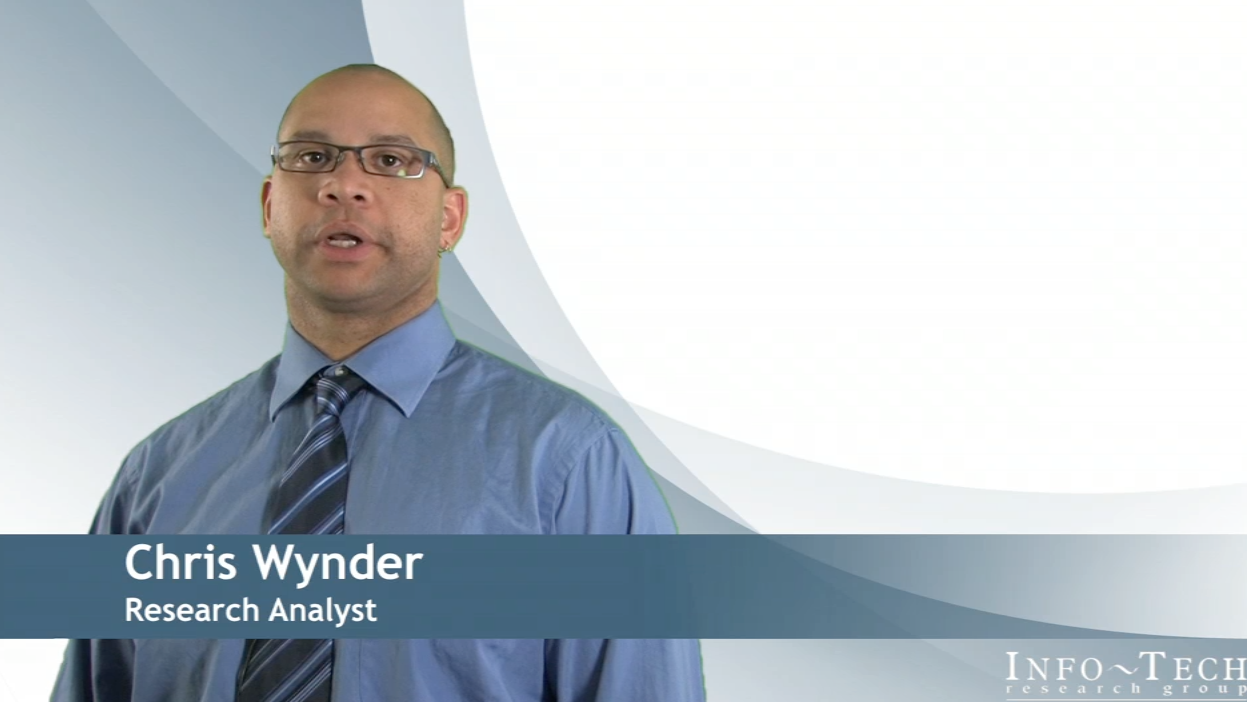 Why EHR Solutions Are Not Being Adopted by End Users

The Problem Is the Connections

IT managers must convince the various other stakeholders; hospital administration, doctors, nurses, and patients that EHR serves each stakeholder’s individual needs. While all of these stakeholders must be mollified in order for a smooth adoption, you must identify which stakeholders, in the decision making hierarchy, are blocking adoption and understand how this group can be brought on board. The various stakeholders have unique and discordant wants and needs from digital records. In this report, we will limit the discussion to the over-arching drivers of change, and the main source of slow adoption of digital records. 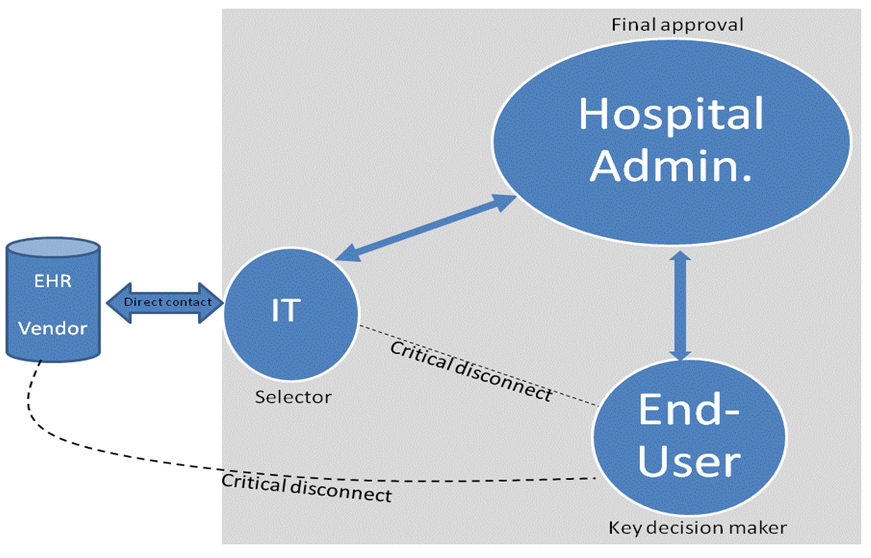 The main push for digitalization of patient records, i.e. EHR or electronic medical records (EMR) is based on the assumption that this will trigger a number of widespread efficiencies throughout the system. Although there are subtle differences between EHR and EMR, for the purpose of what is slowing adoption of digital records they can be considered as a single type of product.

The main driver of widespread adoption of EMR will be overall cost savings to hospitals and/or physicians. However, the stakeholder beliefs on potential societal benefits cannot be overlooked. Anecdotal evidence from catastrophic events, such as 9/11, hurricane Katrina in New Orleans, and the California house fires, suggests those individuals that have EMR records had better healthcare outcomes; timely prescription refills, care of chronic conditions, etc. This data is a key reason that consumers (i.e. patients), large insurers, and governments are pushing for a quicker adoption of EHR/EMR, which can migrate easily between healthcare providers. Hospital administrators are pushing for IT managers to quickly source and implement EHR to take advantage of government programs to cover the costs. Early adopters of EHR/EMR have seen ineffective and unused solutions due to end-user resistance. This leads to reassessment by administrators on how to proceed with EHR implementation. These same administrators are now cautious to proceed without the consent of the end-users while still pushing IT to quickly implement a solution.

Why Are Doctors so Reluctant?

It is important to note that doctors, of all the end-users, are the single biggest obstacle to adoption of EHR, as discovered by over thirty-five separate surveys performed between 1998 and 2011. While cost of investment was an issue for this group, the single largest obstacle cited by these doctors was a perceived difficulty of use. Their reluctance is due in part to a belief that it will cost them time and increase their staffing requirement to use EHR. Since doctors do not feel that EHR will benefit them directly, they are reluctant to take on the cost and are not willing to be flexible about taking staff away from patient care to receive the proper training. For this reason it is vital that IT managers have a direct relationship with key care providers to understand what they are looking for in EHR/EMR solutions.

A meta-analysis of twenty-two studies by Boonstra and Broekhuis in the journal BMC Health Services Research shows that physician resistance to EMR is complex but is largely based on cost-related factors. The essential problem for physicians is integration of the different data sources into a legible document that fits the needs of doctors and nurses. For example, in a critical care environment doctors and nurses need access to patient data. While the nurse needs a quick way to look at up-to-the-minute vitals and care schedules, the attending doctor needs timely access to treatments given and the patient response. This information is readily available in the patient charts, which both groups are accustomed to scanning for the pertinent information.

While vendors have a variety of solutions that are IT optimized, the end-users have not felt that these have met their specific needs thereby decreasing the adoption of these solutions.

What Are End Users Looking For?

EHR documents in the US exist as a series of fragments with each hospital’s or doctor’s patient database existing in a proprietary encryption and filing system. While from the individual doctor’s point of view, this should provide them with control and peace of mind; it does not have the interoperability that will drive cost efficiencies or long term viability in mind. Long term viability is an important aspect of any infrastructure project, which is how most hospitals view EHR.  Convincing doctors to adopt a single solution is difficult without convincing them that data security and cost concerns will be mitigated. Surveys performed over the last five years suggest a strong bias against allowing control of their life blood by IT or any other outside entity.

Remember, patient records are vital to doctors from a malpractice point of view in addition to patient care. Since malpractice insurance is a large expenditure for doctors (or the hospital in some cases) this aspect of cost control weighs heavily in their decisions. The CIO/IT managers need to understand that the doctors carry a great deal of weight in the decision process today at most hospitals, according to end users interviewed.

The problem is that the vendors’ EHR solutions are not based on what the end-users are asking for or what governmental agencies (e.g. NAS, US HIT program) are outlining as optimal models. The lack of direct compatibility of these solutions with government models reduces the ability of hospital administration to find outside funding for the cost of EHR adoption and maintenance. This combined with the fact that most doctors prefer paper records and older diagnostic machinery, according to interviews with a number of doctors and nurses as well as published surveys.

The majority of current EHR software is not built for back compatibility with these very specific legacy machines thus decreasing any enthusiasm for these products. This coupled with a lack of clear return on investment for EHR, particularly when compared the newest diagnostic machine, means the doctors, who have a great deal of leverage, are not pushing for EHR adoption (see Boonstra and Boekhuis or the NAS whitepaper of EMR). Therefore, vendors need to be clear about how their particular solution can minimize costs to doctors in a tangible way. Since many of the EHR documentation and database systems are generally perceived as a new technology, most medical staff are reluctant to endorse or even take the time to understand what they consider a speculative venture. IT managers need to speak directly to the end user with a message that speaks to the reliability and ease-of-use of the software that is being selected.

Why Early Commercial Solutions Are Being Adopted by End Users

The solutions with the highest adoption rates are self-made and have been driven by the physicians and IT departments working together to build the infrastructure and pick the solution from scratch (see Partners Healthcare example, and other successful EHR adoptions: University of Pittsburgh Medical College and the US Department of Veterans Affairs).

Currently, the most successful commercial software solutions fall into one of three different types:

While there are several vendors, each one of them has their benefits and drawbacks. Info-Tech picked five examples that encompass the features that doctors specifically would like to see incorporated, and we have contrasted these with the three homemade solutions in grey. The key lesson is not who they are, but how their solution captured a segment of the market. 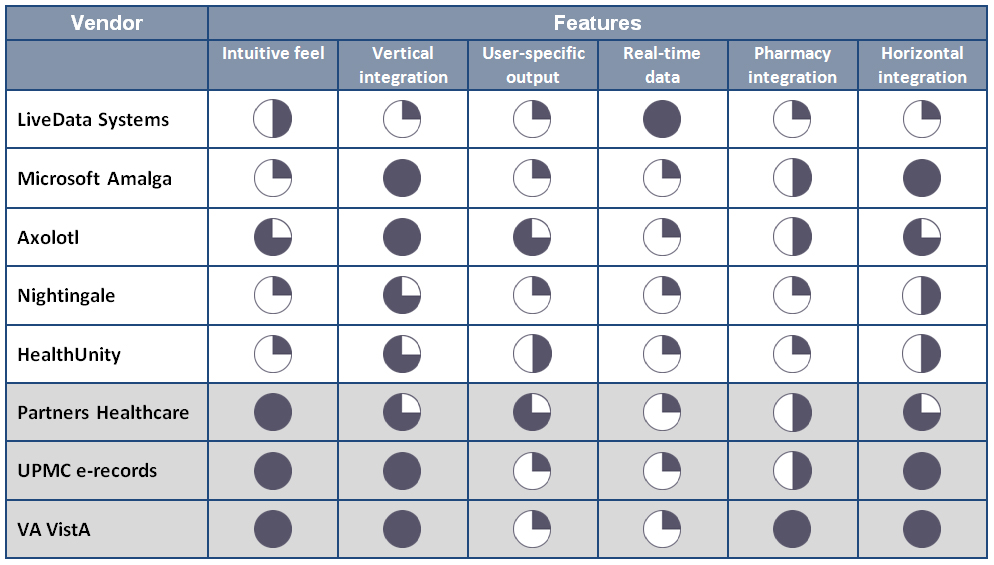 In this report, the level of fill for a Harvey ball is based on subjective response to product demonstration by healthcare providers and third-party analysts. A solid ball represents the top score with a highly positive response; three-quarters and one-half represent a positive but mixed response from healthcare providers, and one-quarter Harvey ball is a mixed neutral and negative response. Feature list is based on the needs list from multiple surveys.

Partners, UPMC and VA are all hospital built and administered solutions and are the benchmark.

All of these examples have additional aspects that appeal to specific stakeholder whether it is patient confidence, hospital liability, or end-user experience. This list is not complete and does not include such giants as MEDITECH, and Cerner. While a large number of additional vendors have achieved very similar solutions these five are the most comparable to the in-house solutions (grey rows), which are widely respected by doctors.

What You Need to Know

The main problem for the majority of vendors appears to be one of marketing. These examples were chosen not only for their actual software solutions but for the clarity with which the solutions were explained. Most IT managers and vendors fail to understand that the end-users want some analytics on the savings in time and money presented to them prior to the on-site test.  There is still a tendency to be vague and ephemeral assuming that doctors will adopt EHR solutions because it’s a really good idea for patients.

EHR documentation and database systems are generally perceived as a new technology that may or may not provide efficiencies with little or no tangible increase in patient care. A study entitled “Electronic Medical Record Systems in Critical Access Hospitals: Leadership and Perspectives on Anticipated and Realized Benefits” shows that, at the time of publication (spring, 2010), there had been no benefit seen at hospitals that had adopted EMR. This makes EMR/EHR a poor investment when compared to specialized equipment, such as MRI machines, which quickly pay for themselves and have tangible increases in patient health (CDC, NAS, and Stats Canada).

As an example, to install an MRI machine costs $2M. In most US states the average cost for an MRI examination is $2200, which means that the cost of installation requires only 1000 patients or approximately one year of average use for a machine that has a 10-30 year useful life (data from Pennsylvania health care cost containment council). In addition, the CDC reports that MRI is now considered a standard of care and therefore is a must-have item for hospitals to maintain and upgrade in order to remain competitive. Diagnostic equipment has a tangible return on investment to the frontline users (i.e. Doctors, nurses) and also can be a marketing tool in competing for niche patients (i.e. high yield patients). Since EHR does not have a readily apparent short term benefit to either the administration or doctors, there is little incentive for either of these parties to assist in moving EHR adoption forward.

Doctors are looking for three features from EHR:

For EHR implementation to go smoothly, and maximize cost efficiencies, IT managers need to take the initiative and follow these three steps:

Adoption of EHR/EMR has lagged behind the rate expected in the US market. This appears to be largely due to low end-user adoption. IT managers need to understand the end-user needs and get them on board during the adoption process to fix this problem.