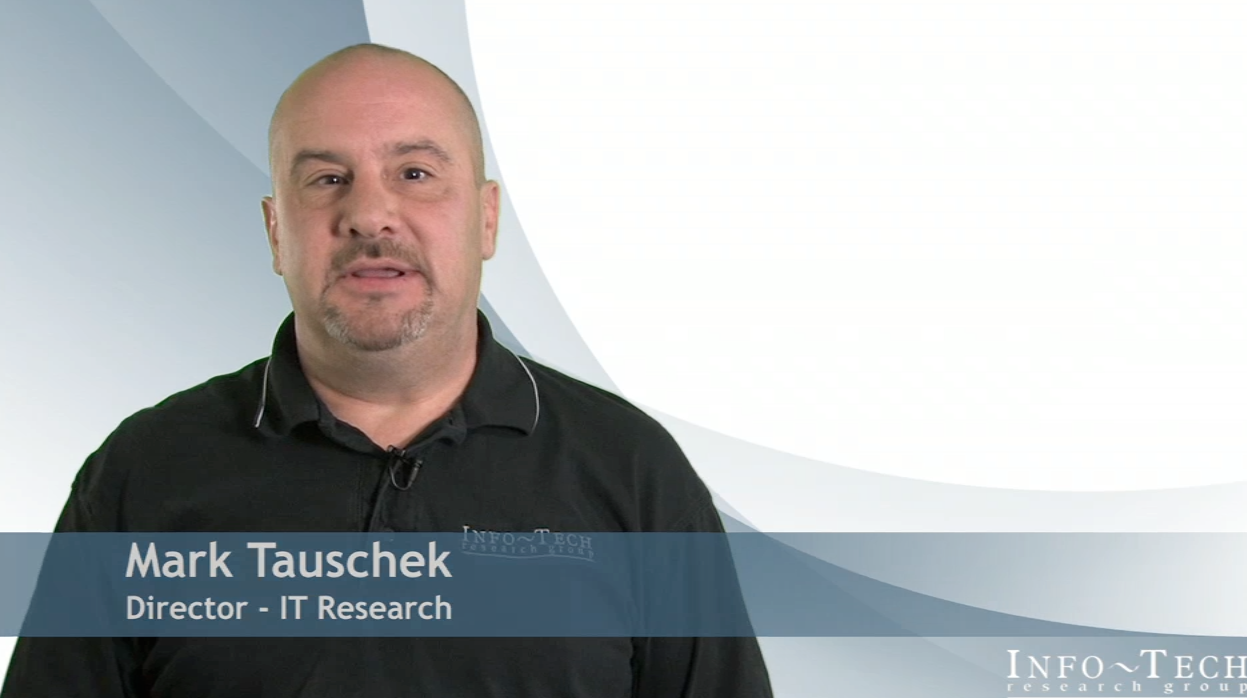 If 2010 marked the tablet eruption, then 2011 will be the year the tablet hits the mainstream. Info-Tech estimates that the tablet market will explode to 40-50 million units in 2011 – somewhere in the range of 300% growth over 2010. Apple’s iPad will continue to lead in market share, but the approximate 90% share it enjoyed as the first to market in 2010 will drop to 60-70% (24 million to 35 million units). While most tablets will still target the consumer, there will be some business-targeted devices. More importantly, the increasing adoption of consumer technology in the enterprise will lead to widespread tablet adoption for business use (for more information, refer to the Info-Tech solution set, “Manage the Invasion of Consumer Technology”).

Apple Blows up the Market

When Apple announced the iPad in January 2010, many naysayers mused that it was merely a toy with no place in business. Some even anticipated that it would mark the beginning of the end of Apple’s meteoric rise that started with the first iPhone in June 2007. Since the day that Apple announced the iPad, Info-Tech’s point of view has been that that the tablet form factor and functionality would find a place in the enterprise (for more information, refer to the Info-Tech video and brief, “iPad Adoption: A Viable Enterprise Option”). This has played out in several high profile deployments across vertical markets, as well as in discussions with many Info-Tech clients.

As we near the end of 2010, few can argue against the fact that Apple has introduced a truly disruptive product. The iPad has created a new category of personal computing and addressed a market demand that has resulted in almost 7.5 million iPads shipped in its first five months. The busy fourth calendar quarter will likely see that number exceed 12 million. Sales of the iPad exceeded those of iMacs and MacBooks in the quarter ended September 30th – the first full quarter of iPad availability.

The Year that Was

While Apple started a viable tablet market, it isn’t all about Apple – it’s about a new category of personal computing device and a still nascent, but rapidly growing new market. What has happened in this emerging space is akin to what occurred with smartphones in 2007-2008 and netbooks in 2008-2009.

The smartphone story continues to evolve, and the market continues to explode. On the other hand, the last chapter of the netbook story has been read a mere three years after the Asus EEE netbook made its first appearance in late 2007. Did the tablet put the last nail in the netbook coffin? It certainly did. Figure 1 clearly demonstrates that the introduction of the iPad – and tablets in general – completely cannibalized the delicate netbook market. 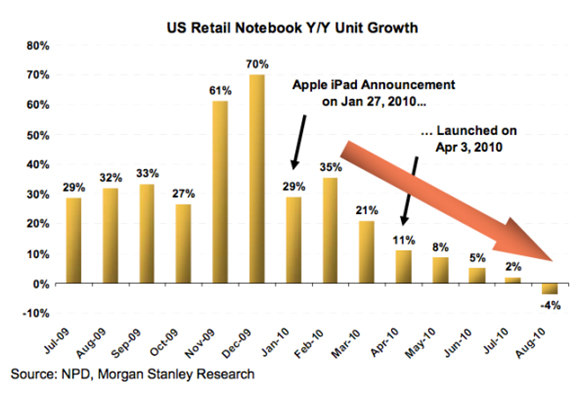 Before Apple announced the iPad, Microsoft CEO Steve Ballmer stood on stage at the January CES (Consumer Electronics Show) and announced three tablets destined to be running Windows 7 in the coming months. The most compelling of the triad – the HP Slate 500 – finally shipped in late October, missing the estimated second quarter timeline significantly.

While it looks like a compelling Windows 7 tablet, the $799 price tag and general lack of touch-friendliness in Windows 7 resulted in a very small initial production run (estimated at as few as 5,000). The first production run sold out immediately to HP’s enterprise customers. The Slate 500 was the first purpose-built enterprise-class tablet to ship, albeit not widely.

Then there are the myriad crossover tablets: devices that are aimed at consumers with business appeal. You name the computer manufacturer, and they have all announced or launched tablet devices. There are far too many to name here, but those that stand out are the Dell Inspiron Duo convertible netbook/tablet (custom skinned Windows Home Premium - $549), the Samsung Galaxy Tab (Android 2.2 Froyo - $599), and the Archos 9 PC Tablet (Windows 7 Starter - $430). Archos also has a stable of Android-based tablets on offer. Nary a day goes by that we don’t hear of another tablet hitting the market.

The Year to Come

Expect to see more enterprise-targeted tablets in 2011. Cisco (Cius – less than $1,000, availability Q1 2011), Avaya (A175 - $1,500, no ship date), and BlackBerry maker, Research in Motion (PlayBook – less than $500, availability Q1 2011) have all announced tablets targeted at the business market. The Cisco and Avaya offerings seek to serve a specific niche in the video/unified communications space, while the PlayBook will be compelling for both work and play.

The 2011 line of tablets will see evolution in a few key areas:

We know that the iPad 2 will be announced (likely in January) for launch in the first or second quarter of 2011. It will almost certainly sport a front facing camera, at least one USB port, and possibly an HDMI-out port. Microsoft’s Steve Ballmer will once again take the stage for the opening keynote at CES in January to announce at least a small handful of Windows 7-based tablets (and possibly an OS adapted for the tablet). Hopefully Microsoft will have better luck getting something more compelling to market in 2011.

Tablets are for Consumption, not Creation

In Info-Tech’s hands-on review of the iPad in April we addressed some comments from clients around tablet use cases and applicability. This commentary is worth repeating here, and has been validated over the past eight months.

“In general, I’d like to reiterate that this particular device, and this class of device, is not appropriate for all verticals, organizations, roles, and/or users. It does not replace the desktop/laptop or the smartphone. It falls somewhere in between. Here are a few more specific examples:

If you think about it, there are several scenarios where this type of device is appropriate in the enterprise. Is it for the knowledge worker creating content? No, it’s not. This is a content consumption device, with the capability for input and light content creation. Again, it does not replace a desktop/laptop, it augments where appropriate. If you can’t think of a single situation where this class of device (don’t get stuck on the iPad) would be useful in your organization, there’s a good chance it’s not for your business.”

At the end of the day, you want to know which of these tablets are/will be a good business fit. In a nutshell, here are some guidelines for tablet selection:

Early in 2010, Info-Tech predicted that it would be the year of the tablet. Was the prediction accurate? It was, although many vendors have not moved as quickly as expected getting their tablets to market. By the end of 2011, every major (and minor) consumer and enterprise technology manufacturer will be vying for a share of the rapidly growing tablet market.