Nobody can claim Marc Benioff, CEO of Salesforce.com, is anything if not audacious in his plans for growth. Salesforce recently announced a targeted revenue goal of $60 billion annually by 2034. Contrast that with the current forecasted revenue guidance of $12.5 billion for FY2019.

This blockbuster goal was recently announced by CTO and co-founder Parker Harris at an exclusive analyst presentation. Through this meeting, we learned that Salesforce has set some lofty revenue goals as measured against its current run rate. These include the aforementioned 2034 goal of $60 billion, but equally aggressive are the interim steps of $20 billion by 2022 and $40 billion by 2028. These revenue goals were announced in a “chapter” format (see below) that show the progression as a Table of Contents in “The Book of Salesforce.” 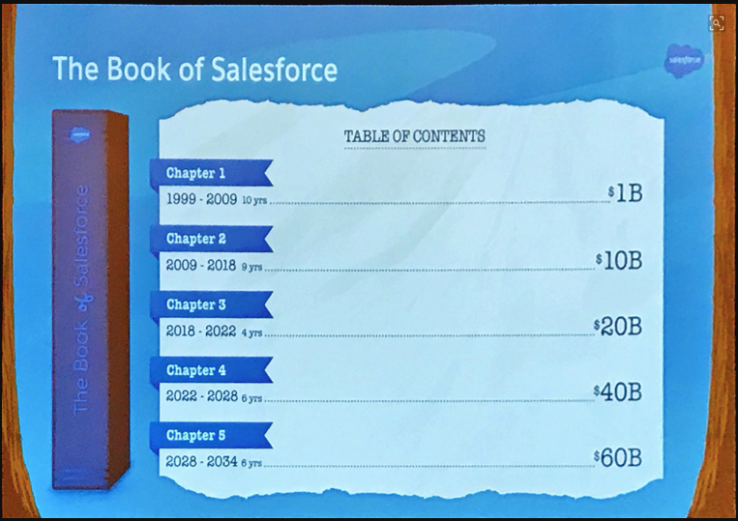 According to the presentation, Salesforce is entering Chapter 3, a four-year period spanning 2018 – 2022 with a revenue goal of $20 billion, effectively doubling the $10 billion milestone just recently eclipsed by Salesforce in calendar year 2017. While the $20 billion number is not a new goal, and was previously announced during Salesforce’s Q3 earnings call, the announcement to move to $60 billion is quite the eye opener.

Salesforce just recently eclipsed the $10 billion annual run rate, effectively doubling annual revenues from $5 billion in a little over 2.5 years! It looks like Salesforce is continuing to look at a doubling effect over a set period, even though these time horizons are now extended as compared to previous doubling cycles. Chapter 4 covers 2022 – 2028, a six-year period of time, where Salesforce intends to double revenue again from $20 billion to $40 billion annually. Chapter 5 spans another six-year period, 2028 – 2034, where the final $20 billion in annual revenue aims to be attained.

Diversified Growth Above the Market

How is Salesforce.com going to reach such lofty goals? During the Q3 earnings release last November, it announced that it was going to rely heavily on large commercial enterprise companies. So we expect Salesforce to continue to push new products into its existing customer base, especially if you are just a Sales Cloud customer and have yet to adopt Service Cloud or Marketing Cloud. Look for Salesforce to present opportunities for customers to adopt additional products under a special pricing scheme, but be cautious to ensure that the price presented is discounted appropriately, which will require some price calibration by a third party. It is also critical to obtain contractual assurances from Salesforce that the promotional or discounted pricing will be provided for a longer period than a single subscription term.

One of Salesforce's key strengths comes from an internationally diversified abundant customer base that covers major cities all around the world. According to the company's latest investor presentation and quarterly SEC filing, Salesforce’s revenue growth rate is approximately double the global CRM market and exposure to a single client has not exceeded five percent of total revenue. As can be seen below, Salesforce also recently significantly expanded its highest-paying customer band from three $20M+ customers in 2014 to twenty-four $20M+ customers in 2018. 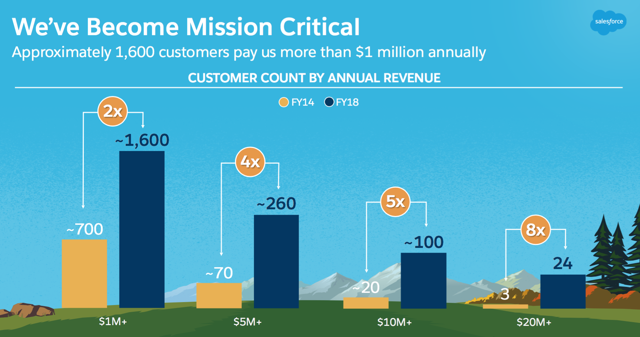 Over the past few years, Salesforce has also successfully managed to gradually grow its market share to almost one fifth of the whole global CRM market. Between 2009 and 2016, the company's market share went from 6.3% of the market to 18.1% while market shares of Salesforce’s major competitors in the field of enterprise software stagnated or shrunk. This testifies Salesforce’s durable growth and clear competitive edge in the CRM market segment. 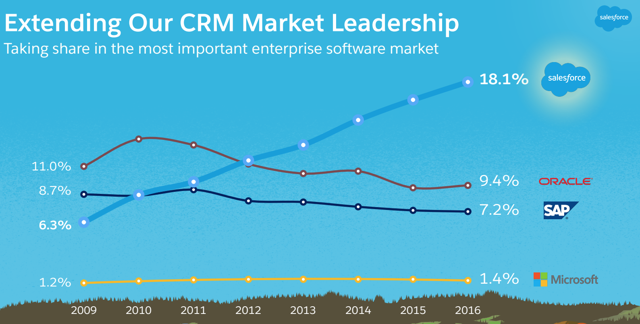 Expect Salesforce to stay aggressive with its acquisition strategy. For consumers of technology solutions that may be considered an acquisition target, it is critical to understand what the go-forward relationship will look like under Salesforce if it acquires a company that resides in your portfolio. Preparation in advance of an acquisition notice is key. In calendar year 2016 alone, Salesforce spent ~$5B acquiring critical technology to build out its product roadmap. Key examples include SteelBRICK, which brings native CPQ functionality to Sales Cloud, Quip, which aims to compete with MSFT in the productivity apps space, and the megadeal for Demandware, which has become the core of the Commerce Cloud offering. Many smaller acquisitions have and continue to add to Salesforce’s target AI initiatives, branded Einstein offering. 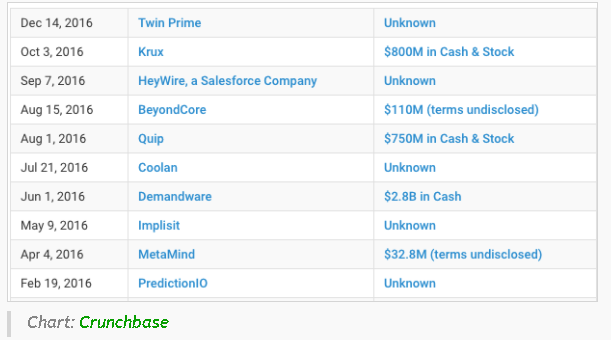 The graphic below, while difficult to read the fine print, clearly illustrates the acceleration of Salesforce’s growth by acquisition strategy. Salesforce customers should also be cognizant of the multitude of functional solutions being consumed from the Salesforce AppExchange, as it is not uncommon for Salesforce to acquire or create competing functionality with its ecosystem solution providers and partners. Some are forced to retreat and/or pivot in focus or exit the marketplace altogether, while leaving their customers high and dry in the process.

“That’s quite an aggressive set of ambitions for any company. Let’s face it, for a company to reach a billion dollars in revenue is a great success, but to set a goal of $60 billion is an entirely different matter. To put it in perspective, Oracle was a $37 billion company in 2017 (according to Statista), Microsoft was a whopping $90 billion company last year, so it’s not completely outrageous, but it would probably require that the company continue to be aggressively acquisitive as it was in 2016 and to maintain its steady record of growth for the next 17 years.”

One only needs to look as far as some of the few failures that Marc Benioff and team encountered, such as the failed bid for LinkedIn, which Microsoft swooped in and scooped up before Salesforce even had a chance to properly make a bid. Later in the year, it was rumors of a Twitter takeover, which met resistance with shareholders in the form of a sharp stock decline as well as pushback from the board of directors. Benioff eventually backed away from this deal as well. 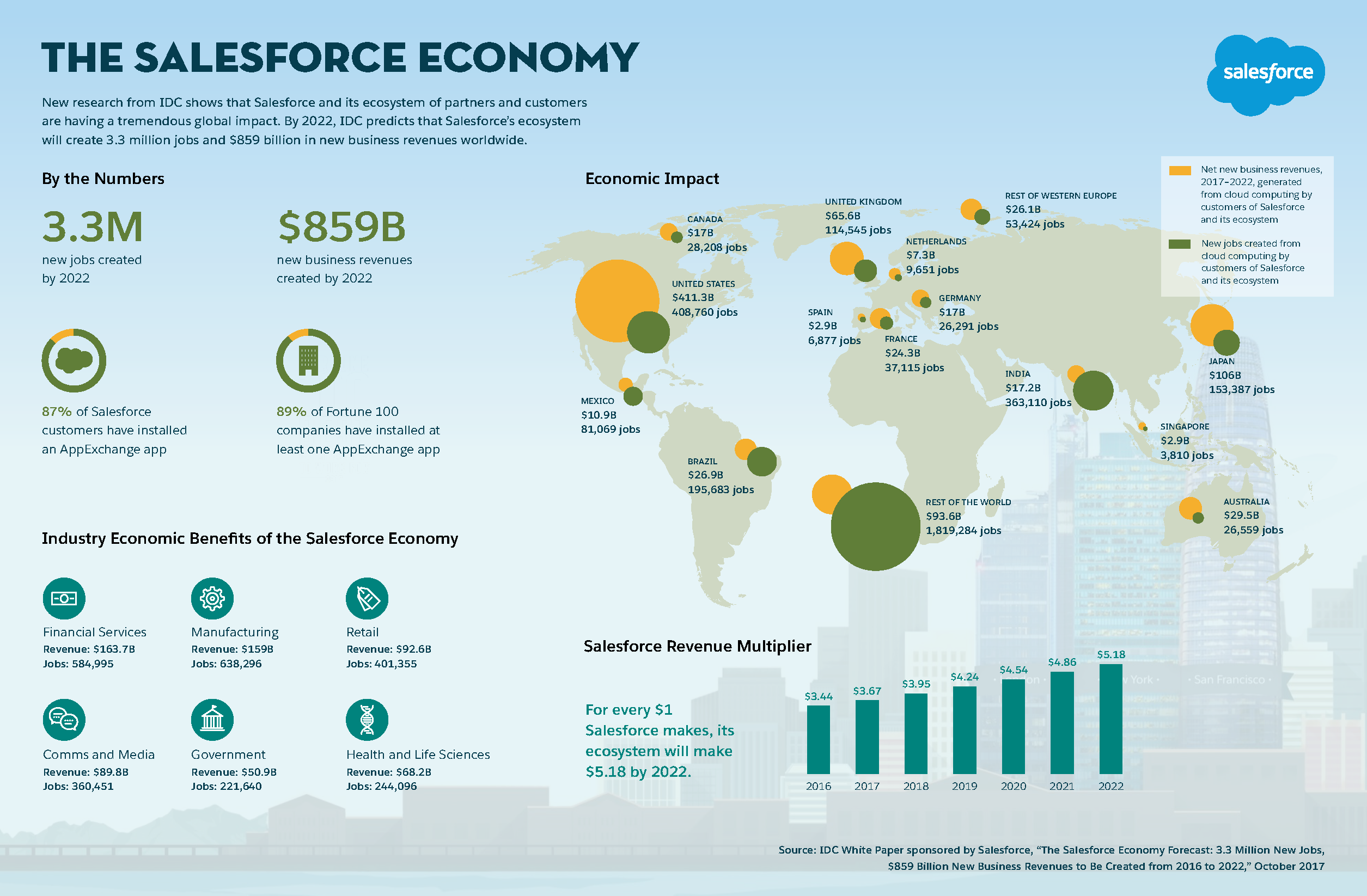 It is more important for both potential and current Salesforce customers to keep in mind that growth by Saleforce.com only represents a fraction of the spend that your organization will likely face in adopting the ever-expanding array of solutions being offered. Salesforce has commissioned IDC to produce an annual study that measures the size and growth of the Salesforce.com ecosystem. The most recent study claims that the collective customer and partner ecosystem will drive the creation of 3.3 million new jobs and more than $859 billion in new business revenues worldwide by 2022.

The study also states that ecosystem partners will gain $5.18 for every dollar Salesforce earns. While these numbers should definitely be received with a healthy dose of skepticism, the important takeaway is that you can plan to spend a multiple of your core Salesforce spend on consultants, personnel hires, and other ancillary expenses in order to successfully deploy and optimize your Salesforce system. Salesforce.com may be a company “born in the cloud,” but the overall costs and timelines to reach full value and use of the system are starting to more closely resemble their peers, SAP and Oracle, and their nightmarish legacy ERP implementation projects.

Salesforce.com Q4 Upon Us

January 2018 represents the fiscal year end and Q4 conclusion for Salesforce.com’s fiscal year 2018. As you can see from the recent announcements and the all too common marketing hype machine, Salesforce has pressed the “pedal to the metal.” Customers of Salesforce can expect the going to get rougher as contract renewals come due, annual price increases are enforced more rigorously, all the while being heavily pressured to spend more within the growing arsenal of Salesforce products.

As Salesforce is currently pushing to close out Q4 of its FY2018 at the end of this month, we will see its performance via an earnings announcement in late February 2018. Info-Tech Research Group will be monitoring these events to see how Salesforce is tracking toward its revenue for this quarter and the full year results to include any clues that Salesforce executives drop with regards to future revenue goals.

Salesforce is looking to turbo-charge an already explosive rate of growth with plans made to cover the next 15+ years! Salesforce is prepared for the future, so you need to be prepared for Salesforce now. Carefully consider your full technology stack strategy and clearly understand where Salesforce may or may not be a long-term fit.