In what appears to be an act of sheer overpriced desperation, IBM has acquired Red Hat Inc. for around $34 billion, to be completed by the second half of 2019. This purchase is the largest acquisition in IBM’s history and the third-largest tech deal of all time. Why would IBM pay such a premium, almost one-third of its market cap, for an open source–based software company with revenues just approaching $3 billion per year?

As the saying goes, a picture is worth a thousand words: 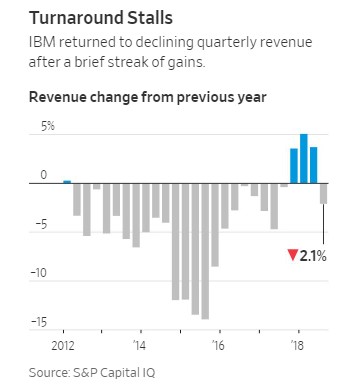 With annual revenues dropping from almost $107 billion in 2011 to around $79 billion in 2017, the company is finding it difficult to make the pivot to cloud and other emerging technology segments such as AI amid declining core mainframe and services business.

After many years and many billions of dollars in investment in the cloud segment, IBM is firmly entrenched as a laggard, holding only about 5-6% of total market share across all cloud segments (e.g. IaaS, PaaS, SaaS, hybrid). 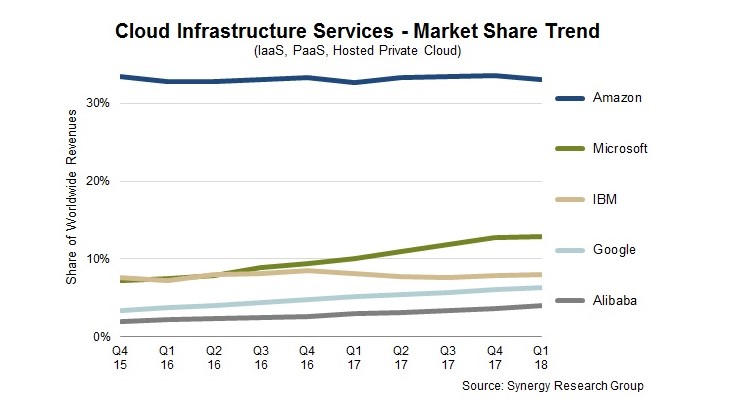 As the chart above indicates, IBM has lost the initial war for cloud infrastructure market share and is so far behind cloud titans Amazon and Microsoft that it no longer makes sense to fight that battle. In a titanic pivot, IBM is now focusing on the coming wave of hybrid cloud and multi-cloud customer scenarios, which includes enterprise data management capabilities between private, public, and on-premises workloads and across multiple cloud environments. The results of this expensive shift in strategy will not be known for years; however, the world of hybrid and multi-cloud management vendors seems to increase by the day, so there will be no shortage of competition.

Many customers – and Red Hat employees, for that matter – are already concerned about IBM’s stewardship of the Red Hat open-source philosophy and sales approach and how it will affect company culture. While IBM has been an open-source software (OSS) support and a generally good steward in the past, the culture clash between these organizations may prove to be too much to digest. Key employee departures from Red Hat should be monitored closely.

For its part, IBM is making the pitch that the next wave in cloud computing markets will focus on hybrid clouds and multi-cloud management. IBM is betting that enterprises prefer a vendor-agnostic offering that will preserve data standards in a more open format than some proprietary cloud vendors currently allow. IBM highlights this opportunity with some large market opportunity predictions: 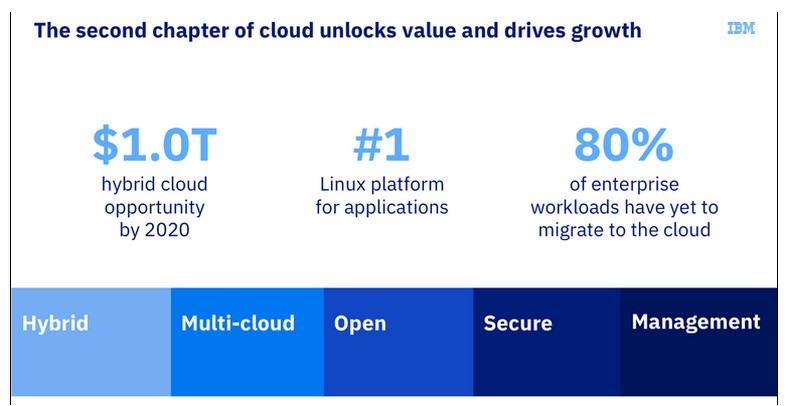 IBM also highlights how this merger will benefit both companies and even goes on to state that IBM’s SaaS cloud offerings will leverage the Red Hat technology stack as the platform in the future. 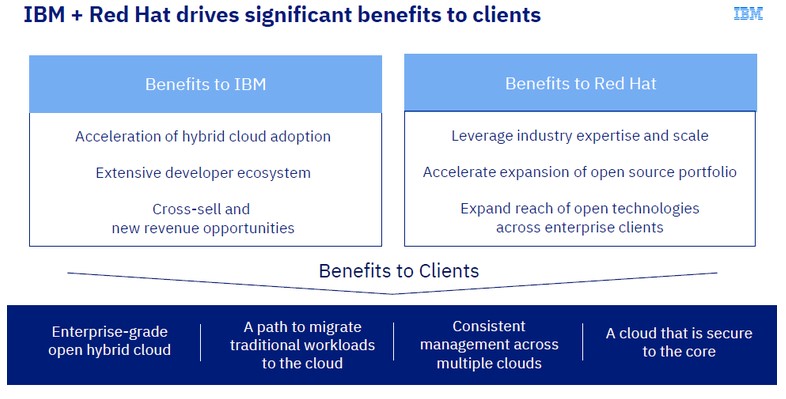 The press release is unsurprisingly positive on how this deal will benefit both IBM and Red Hat in the hybrid cloud space. The reality in the marketplace will depend heavily on IBM’s ability to bridge the gap between public cloud environments and on-premises servers. In fact, the competition and efforts by Microsoft (Azure Stack), Oracle (Cloud at Customer), and VMware’s partnership with AWS does not guarantee that Red Hat/IBM will be the most desirable solution going forward. IBM and Red Hat have already maintained close partnerships for over 20 years, so the “net new” is currently an unknown in terms of added value for customers.

Red Hat is considered the most pure play vendor at scale operating in the OSS space, but this is changing as well.Microsoft just acquired GitHub, and Amazon and Google both have been quite active in bringing to market open-source solutions as well.

It is hard to imagine two cultures that contrast one another more than Ginni Rometty’s buttoned-up Big Blue and Jim Whitehurst’s Red Hat, which embodies principles of his book, The Open Organization, and a more technocratic approach. This quote from Whitehurst may sum it up perfectly:

“Some people are like fish to water, they love this place. They love the culture, the way we operate. They like the debate, and the openness. And then we have other people who are extremely hierarchical in their thinking and worldview, and they typically do not work out well here.”

In spite of the obvious differences in culture, both CEOs are putting a positive face on the merger. Rometty has quickly stated that Red Hat will be a “distinct” and “independent” operation within IBM’s hybrid cloud unit. Large mergers with contrasting cultures generally do not have a great record of accomplishment. Remember HP/Compaq, anyone? Only time will tell, but Red Hat customers may want to keep their ears to the ground to detect early rumblings in open-source paradise. IBM has a history of guiding engineering efforts in OSS towards projects that are commercially viable to IBM, whereas Red Hat encourages its engineers to work on any OSS project of interest, even if it may conflict with Red Hat’s goals over the long term. This is a key cultural component to monitor going forward.

Culture is not the only area of the business where IBM will need to wield a light touch if it hopes not to alienate Red Hat customers post acquisition. The core of Red Hat’s business has and will be the development of OSS that adds value and ease of use for IT practitioners, whether it is through RHEL for Linux, Kubernetes in containers, or OpenShift in the PaaS space, and it is unlikely that IBM will do anything to disrupt that mission. In fact, Red Hat should open up doors to IBM that allow it to offer vertically integrated stacks in the areas of AI, deep learning, and analytics that can be seamlessly matched to a much wider array of hardware options than can be supported currently. This will be a boon for channel partners of both companies, as Red Hat’s solutions already integrate with IBM’s application stacks.

Bluewash May Occur at the Contract Level

One constant over the decades is the rapidity with which Big Blue incorporates newly acquired entities into the IBM marketing, licensing, and contract structure. Through this process, known in the industry as “Bluewashing,” IBM will force customers of the acquired company to migrate their contracts to the complex and convoluted IBM contract structure. The methods by which this can occur are varied and may take the form of an embedded URL on a support invoice effectively moving you under the IBM Passport Advantage agreement.

Do not accept this, and be aware of what your current Red Hat agreement allows or requires in terms of modification of the legacy agreement. Typically there is a multi-step formal notification and migration process that IBM must follow in order for any license and contract migration to be valid. Contact us at Info-Tech Research Group to learn more about this process and how to protect against being Bluewashed. IBM regularly botches this process through neglecting to follow its own process, losing key records over time and then seeking to enforce new rules on clients through a license compliance audit.

It is imperative for Red Hat customers to understand how any license migration will function in several key areas:

While some industry analysts and even the Linux Foundation itself are praising this acquisition and downplaying the Bluewash risk in light of IBM’s strong support of Linux over the years, we feel this viewpoint is myopic. Red Hat customers should not ignore IBM’s overwhelming trend of taking necessary actions to ensure that its acquisitions add material revenue and profits under the IBM commercial and licensing structures.

The diverging viewpoints are primarily due to the positioning of Red Hat within IBM’s hybrid cloud division, which allows IBM to exert complete control over Red Hat, despite claims that IBM will preserve its cultural and development independence. By contrast, Microsoft has allowed GitHub, recently acquired for $7.5 billion, to remain an independent subsidiary – a big difference from IBM stating that Red Hat will remain independent while simultaneously integrating it into the corporate structure from day one.

Prepare for Higher Prices and a Modified License Structure

Customers should be proactive and acutely aware of impacts to the business side of the equation. IBM expects the Red Hat acquisition to be accretive to earnings and revenue within one year of the deal closing in the second half of 2019. While some accretion is expected from cross-selling opportunities, Red Hat customers should expect to see price increases as the second component of IBM’s strategy.

Perhaps IBM views the Red Hat acquisition as an opportunity to pivot from its past practices and carve out a niche as the Switzerland of multi/hybrid cloud management. At this point, however, this is more of an optimistic theory than an evidence-based conclusion. IBM’s share price has tumbled over the past year as the declining mainframe business, coupled with its lackluster performance in the cognitive computing segment, increasingly pressures the company to drive material growth and profits. As noted above, IBM has not allowed Red Hat to operate as a separate corporate entity as a byproduct of this deal, inadvertently signaling that Red Hat’s alleged independence could change at any time.

IBM wants you to believe the acquisition of Red Hat is a neutral move that will enable IBM to compete more effectively in the cloud wars. Red Hat customers should take proactive actions to protect themselves from IBM’s historically customer-unfriendly strategy of migrating acquired companies’ clients to IBM cost, contract, and licensing programs.

Negotiate SaaS Agreements That Are Built to Last