Home > Research > Is Hyperconverged Infrastructure Storage or a Server? Yes!

Is Hyperconverged Infrastructure Storage or a Server? Yes!

Is a hyperconverged infrastructure (HCI) node or appliance a server or enterprise storage? It is both really, so what does it matter? Well, whether you think of HCI as a storage or a server will likely influence the products you eventually purchase.

In 2014 analysts at Wikibon launched a crowd discussion project to define a new architecture that would disrupt traditional storage. They named it “Server SAN.” The name didn’t really catch on. It wasn’t as cool as hyperconvergence, I guess.

But the Server SAN also represented the next step of the ongoing trend of convergence and abstraction (virtualization, software defined) in infrastructure. So if a server shelf, a switch, and a SAN array sold together in a single SKU was “converged infrastructure,” what do you call it when the functionality of all three is combine in one appliance?

Well, that there is hyperconverged infrastructure, my friend.

At the end of the day, though, is this the case of software defined storage consuming the server hosting function or is it just servers taking back the storage function after years of externalized storage ascendancy? Ladies and gentlemen of the jury, allow me to present the case for each position.

Nearly all leading HCI products – whether Nutanix or HP Simplivity or Scale Computing or Pivot3 or half a dozen others – began as external storage products. They began as methods of clustering commodity storage servers together and pool it all as a virtual SAN array. The hosting of server VMs came later.

HCI was initially pitched at niche cases such as hosting virtual desktop infrastructure (VDI). But more recently HCI vendors have been targeting companies looking to replace end of life general purpose SAN storage. Nutanix has been particularly good at this. Looking to replace an aging midrange NetApp or EMC array? Chances are that you’re going to get a call from a Nutanix seller.

From the industry analyst point of view, analyst queries about HCI typically came from midrange organizations, such as larger professional services firms that were looking to purchase storage and had been preached the hyperconvergence gospel according to Nutanix (or Symplivity).

Incidentally, servicing IT departments considering HCI as a storage purchase is why VMware vSAN is not ranked in our Hyperconverged Infrastructure Vendor Landscape. The HCI VL is very much a continuation of our SAN array VLs (It was published concurrently with a new VL on Midrange Storage Arrays). 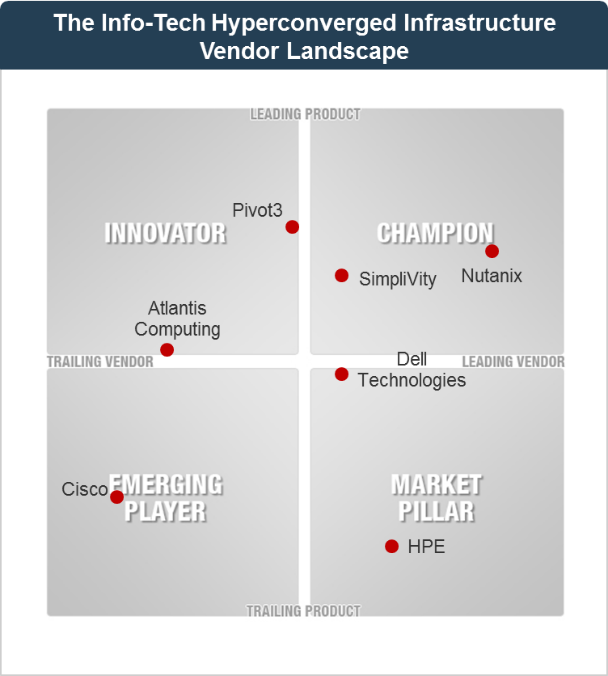 In the past we have focused on branded storage hardware in the Vendor Landscapes on the basis of this being a hardware acquisition. Software only solutions have been ruled out of scope. In the age of software defined everything you can argue with that but that has been our rule. VMware vSAN has been included in a number of analyst firms’ Vendor Landscape equivalents, but for ours it was not ranked but included as “alternative considerations” along with other software plays like Maxta and Scale Computing.

First allow me to let you in on a little secret. All storage arrays are servers. A server is a networked computing device that typically has a central processing unit (CPU), memory, and hard storage (spinning rust or more recently solid state). A storage array is a server – or server cluster – with a large amount of storage traditionally in the form of large numbers of hard disk drives. Increasingly the CPU has been Intel x86, just like any other server.

In a VMware vSAN ready mode, for example, the VMware software is telling the server that it is both a virtual machine host and a software defined storage array. Nutanix software does the same thing but uses its storage management software for the storage cluster.

Going back to our Vendor Landscape case, VMware has been included in many HCI quadrants and waves because there is an awful lot of vSAN out there running on servers from a variety of vendors. Dell, incidentally, is a market leader because they have HCI products running both vSAN and the Nutanix stack.

What can you do with this information? For your infrastructure, what really matters is how you view storage. Are you a storage power user that requires enterprise class block storage with all the bells and whistles? Or are you a traditional distributed server jock that always resented having to buy a SAN array to make server virtualization and consolidation work?

Is HCI next generation enterprise storage or just a glorified server? It is both: advanced software defined storage incorporated into server hardware. But how you think about HCI, as a storage and server investment, will have an impact on the classes of HCI products you will likely need.

Backup Solution Providers: Your First Mate on the Voyage Over the Sea of Change With Cloud Backups

Backup and recovery operations was once a set-it-and-forget it design architecture with a static reference architecture. Then along came the cloud, disrupting everything about how data is stored and processed. Now, more than ever, organizations are looking for their solution providers to lean in and help them navigate the shifting tides of “cloud backup.”

Cyberattacks are terrible and require the same dedication to overcome them as would any other disaster response effort. Just like natural disasters, cyberattacks cause millions of dollars in damage, disrupt infrastructure, and impede citizens from their daily lives.