As we enter the next decade of the 21st century, the term “smart cities” has firmly caught the barbs of its hook into the tech buzzword lexicon. It’s even more popular than industry favorite “digital transformation,” and you can bet you’ll keep hearing it in 2020.

But the tone of the conversation is changing as municipal governments and civic-minded associations around the world show more maturity towards the concept. Public employees responsible for procuring smart city technology work outside of the political opportunism of either aligning with tech giants or opposing them based on whichever way the winds are blowing. They’re looking to solve problems facing growing urban centers, not acquire the shiniest new gizmo to grab attention. It’s why Info-Tech Research Group’s own framework on smart cities takes a “street-smart” approach and focuses on effective cities that are focused on improving the lives of their residents.

In Dublin in early December, many of those public servants gathered for Enterprise Ireland’s Smart Cities and IoT Forum. They discussed the most promising developments in smart city portfolios, the most challenging aspects ahead, and some of the nuances causing friction between tech vendors and municipalities worldwide. Based on the conference presentations and discussions with attendees, here are five points that are top of mind for smart city practitioners in 2020.

Many cities in developed countries are sprawling urban environments that offer a complex mix of residential, commercial, and industrial areas. Governing these mixed-use regional entities with public money has necessitated a cautious approach to procurement that’s often very long and expensive. Historically, large cities haven’t done well at dabbling with small projects as a means of testing for effectiveness at scale. But with agile approaches often part and parcel of implementing new technologies, more cities are learning how to create pilot projects outside of the traditional governance structure. Often that involves setting aside a designated area of land that serves as the test bed.

Conference host city Dublin, for example, has created a two-kilometer-square zone around its docklands area along the River Liffey. It’s been dubbed the “Smart Docklands” and is in proximity to Google’s offices. The city works in cooperation with both industry and academia in a triple-helix model to implementing technology projects and measuring their effectiveness.

So far, the project has seen a slew of interesting projects tested. An efficient waste management approach relies on sensors to alert when bins are full and need collection. Google is collaborating on a project to map out carbon emissions in the city. It’s also providing predictions of motor traffic to city staff for planning purposes, with 95% accuracy. The city also worked with networking vendor Dense Air to deploy a neutral host 5G network, providing open access to interested partners. The docklands test bed is also collaborating with partners including SoftBank and Mastercard and is interested in finding more talent, says Jamie Cudden, smart city lead for Dublin City Council. “We don’t have enough data scientists,” he said, “but we have world-leading tech companies.”

Other attendees pointed out one potential downside of a test-bed model. If all smart city technologies are deployed in the same area, then they’re always being tested against the same demographic mix. It’s possible that not testing new technology with a broader range of citizens could lead to unforeseen problems when trying to scale.


Municipalities have long used connected devices for fleet tracking of vehicles – so why not people? In a world where 5G connectivity will open the door to even more plentiful deployment of IoT devices, it’s a natural area to explore. And cities have many workers that work in risky situations, which is where you’d want to use technology to actively track vitals and location.

SafeTrx and its mobile app, which is available in 13 countries, is one example of a system that’s courting municipal customers. John Murphy, the co-CEO of 8 West Consulting, was inspired to create a cellular distress signal when a phone call saved his life in 2010. Stranded on Mont Blanc du Tacul in sub-zero temperatures at night’s approach, he was able to make a phone call to be rescued. In the aftermath, he realized that maritime mayday calls were mostly made by mobile phone now, not the traditional VHF radio. Today SafeTrx is the standard marine mobile safety platform in nine countries including Ireland, the UK, and Spain.

A new partnership with Sony and its mSafety wearable device, which provides up to 30 days of battery life, activity and health tracking, and emergency alerting via a permanent network connection, was tested in trials in Holland on October 25 and 27. 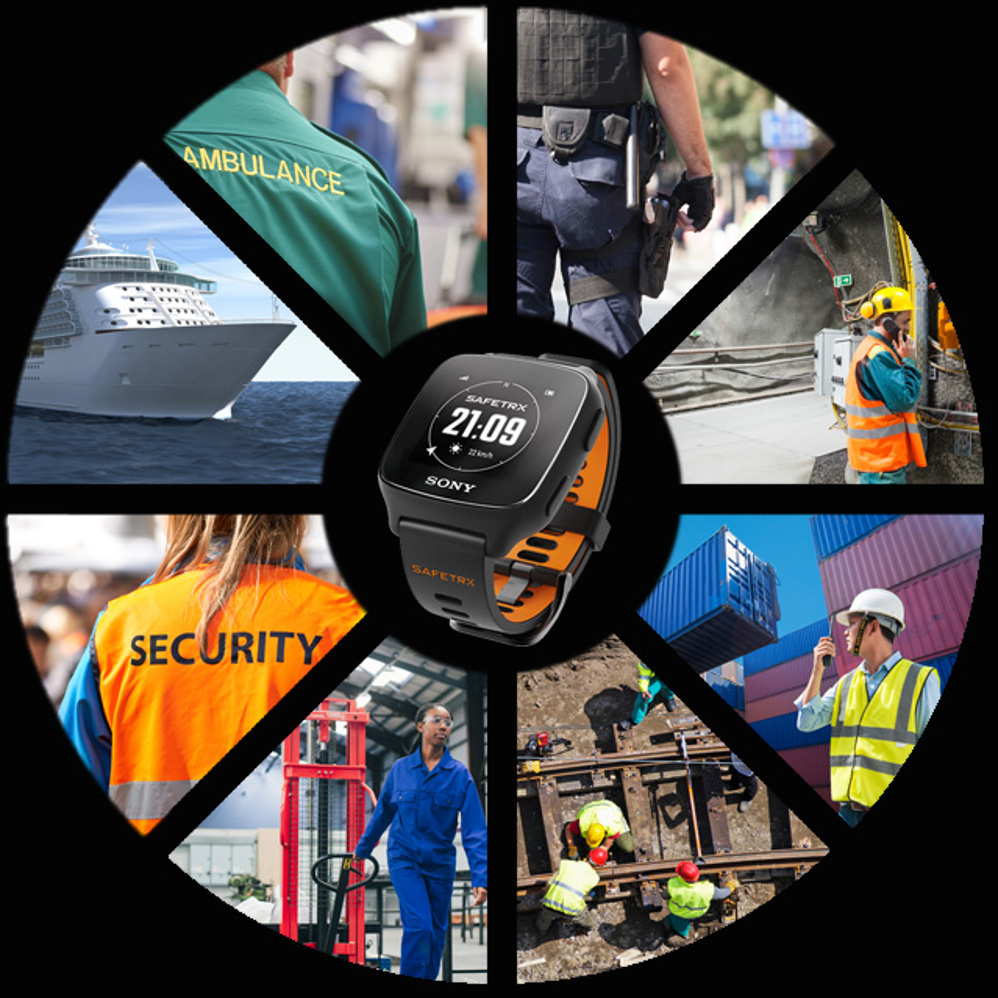 Above: An image from the SafeTrx website shows Sony’s mSafety wearable device, surrounded by a range of imagined industry scenarios for its use.

As mentioned, the current procurement method is seen as a barrier to adopting cutting-edge technology in municipalities. Philip Bane, managing director at the Smart Cities Council, a US-based organization with a global view, says process innovation is important for cities.

“If I’m selling solutions to cities and I have to wait 13 years from the time I’ve given them the idea to the time I make the sale, I’m in big trouble,” he said in a presentation. “So procurement modernization is very important.”

The council offers a framework to help municipalities assess their smart city readiness, which includes an examination of the procurement process. But it’s not just on municipalities to be more flexible with procurement. Vendors must understand their prospective customers when they approach different communities. Conference attendees expressed frustration that too many vendors approach them with an assumption that every municipality has the same priorities.

The traditional method of accessing government services has been to visit different offices in person, take a number, fill out the right forms, and wait your turn. In the digital age, that service-delivery model was ported over directly into a series of websites offered by different levels of government and from different ministries and departments. The resulting user experience is a confusing one, far from the slick convenience offered by consumer brands like Amazon. Citizens are left having to conduct a scavenger hunt to find the service they need – whether it be renewing a driver’s license, registering a marriage, or opening a business – and then navigate through long procedures of self-serve portals to complete the task.

A new wave of customer-centric government services is rethinking that approach by using a “moments of life” model for service delivery. The idea is that government agencies at all levels will collaborate on a self-serve portal that funnels users to their required services based on their life experiences. Having a baby? Go to this website. Solving a tax problem? Go to the same website. Applying for a liquor license? Yup, same place. It’s the model that Canada is working on with its Canada.ca website (a work in progress), and it’s also being used in Singapore.

The “Moments of Life” Initiatives is one of six strategic projects underway in Singapore, said Poon King Wang, director of the Lee Kuan Yew Centre for Innovative Cities, Singapore. It launched a mobile app in June and is still in the pilot phase of the project. “Frankly, this is long overdue, as the private sector has been doing market segmentation by life stage for a long time,” he said. “Still, this is a tangible shift to a citizen-centric approach instead of government department centric.”

Around the world, there is anticipation that 5G cellular technology will unlock new applications for municipalities deploying IoT. The expected lower latency, improved connectivity density, and lower power requirements combine to make it the perfect wireless connectivity solution for IoT devices. But it’s not ready yet. Most countries around the world are in the spectrum auction phase of 5G deployment, meaning that carriers will have to bid for the rights to use the air waves, then build out the necessary infrastructure to deliver the service. So 5G applications at scale are probably about three years away in most regions.

That’s not slowing down municipalities keen on IoT’s potential to contribute to a data-driven decision-making approach. Other networking solutions such as LoRaWAN, a standard developed and administered by the LoRa Alliance of tech vendors, and Sigfox, a Labège, France–based company offering its own proprietary standard.

Jaromir Beranek, chairman of the smart city committee in Prague, says the city is using LoRaWAN and Sigfox for less data-demanding applications as the country conducts its 5G spectrum auctions. And Matthew Schultz of the Australian Smart Cities Association says both Australia and New Zealand are exploring the non-cellular networking standards as 5G emerges.

But both emphasized that 5G cellular will be a significant capability boost for IoT solutions. “We need support for scale,” Schultz said. “[Non-cellular connected] IoT works for now. The concern is that it won’t work as we have more connected devices soon.”

Urbanization and the Internet of Things: Laying the Foundation for Smart Cities

Cherwell has announced it is consolidating its portfolio of modules into a single product at its Clear conference in Nashville this fall. Its promise of an elevated experience is achievable, but customers need to do some work to make it a reality.

ServiceNow and Microsoft are furthering their partnership by hosting the Now platform in the Azure-trusted cloud. These features and integrations are powerful, but comes at the price of vendor lock-in.

At the RSA Conference earlier this month, Spirion announced it had won the Gold Cybersecurity Excellence Product Award in the Data Classification category.

Prepare Now for Your ServiceNow Renewal

ServiceNow’s growth and product diversification clearly indicates the areas in which it needs its customers to engage, grow, and expand. To obtain the best possible renewal pricing and terms, ServiceNow customers must understand what is important to ServiceNow first.