Public cloud spend is expected to grow around 18% in 2019 to $214 billion, ultimately reaching $331 billion by 2022. But public cloud adoption in highly regulated industries is the long tail in global IT spend, which is projected to clock in around $3.8 trillion in 2019. The tide is starting to turn, however, as Capital One and Bank of America (BoA) take significant steps towards migrating their consumer finance businesses out of their traditional data centers and into the public cloud.

While public cloud adoption and growth rates are still increasing at a blistering pace, many feel the primary growth phase is in the area of hybrid cloud computing. The move into hybrid computing by the Big Three (AWS, Azure, and GCP) signals their desire to penetrate deeper into the Fortune 500, where industries are more highly regulated and data workloads cannot yet be moved wholesale to the public cloud. Industries that require core system transactions to run locally can now bridge the gap with applications designed and optimized to run in the cloud.

As we can see from the chart below, most enterprises are seeking a multicloud strategy, primarily comprised of a hybrid cloud model. 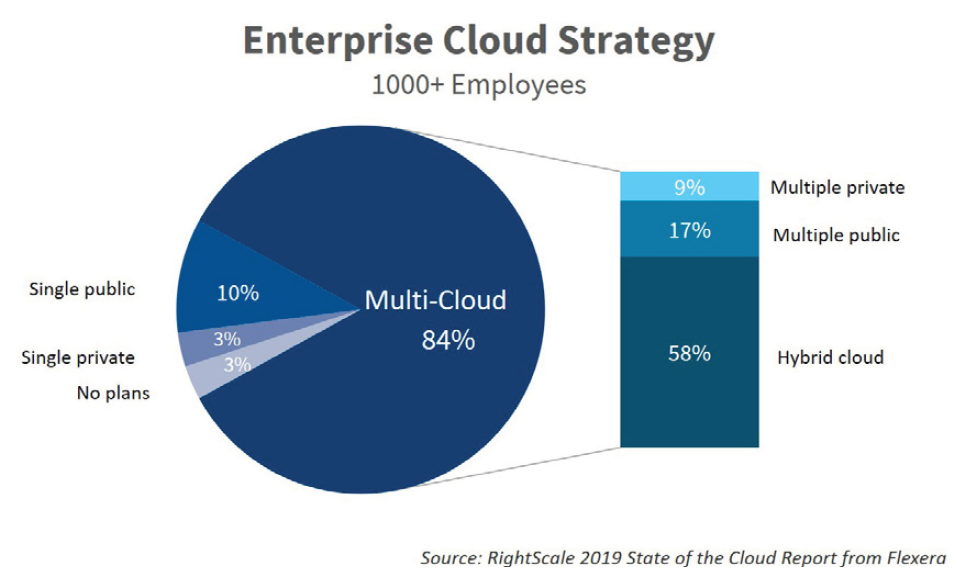 The question that begs asking is, “Why not skip the hybrid cloud scenario and move straight to a public cloud option?” The stark reality is that implementing a hybrid cloud solution is expensive, sophisticated, and just plain hard. Most vendor options require coordination between the cloud vendor and their partner(s), as well as various consultants with the required technical skills to install the solution, configure it, and achieve a steady state of operational effectiveness. Hybrid solutions require an appliance, colocated in the client’s data center, running a cloud management plane intended to keep the public cloud/hybrid cloud experience consistent for the end user.

But the customer is still installing more hardware in their data center, and the promise of cloud was the elimination of these baked-in costs – the location overhead, staff, power, and other expenses. As a result, some forward-thinking banks have started making the move wholesale to the public cloud. For the mega-financial institutions and banks, the scalability, flexibility, and massive compute power coupled with cutting-edge technologies such as AI, blockchain, containers, and microservices will propel their businesses to new heights. Innovations that were either cost-prohibitive or just plain untenable in the traditional data center are ripe for the picking.

Capital One to Move Remaining Data Centers to the Cloud

Capital One is making the bold move of closing its remaining three data centers and bringing those workloads to AWS. This will cap a transformational journey from 2014, where the company operated eight data centers, all multi-megawatt locations.

Capital One is taking these steps despite its recent data breach in July 2019, which affected 106 million people across North America. The breach occurred in the public cloud but was not directly caused by the cloud infrastructure itself. It is essential to highlight this fact, as many in the journalism industry are already conflating Capital One’s aggressive move to the public cloud with the occurrence of this data breach. This move is telling in light of data from Business Insider Intelligence showing that up to 88% of US financial professionals distrust the cloud and another 32% don't understand it.

Yet Capital One is far from alone in its pursuit of digital transformation, particularly the adoption of cloud-based solutions. Recent survey data, comprised of input from over 100 banking executives, indicates that 86% of respondents have adopted cloud solutions, but most (42%) are on private cloud only, with the next group (38%) using a hybrid cloud model.

Capital One is betting that it can capitalize on the unique benefits of cloud computing early on and create a gap between itself and the competition. Aside from any cost savings and efficiency gains from the elimination of on-premises overhead and power costs (which may only occur over the long term), the newest technologies can only be accessed from the cloud. Technologies such as blockchain and AI, for example, depend on cloud-scale compute, memory, networking, and storage resources that, coupled with the global reach of the cloud, allow companies to provide services in an omnichannel world in a flexible and scalable manner.

The Competition Is Not Standing Idle – Enter BoA and IBM

BoA currently runs 80% of its operations in a private cloud, but that may be changing soon. It was recently announced that BoA and IBM have been partnering for over a year on an IBM cloud solution tailored to the specific regulatory and security requirements of the banking sector. Features such as automated security tools and top-level encryption are among those mentioned. Similar to Capital One seeking to benefit from capabilities in the cloud, BoA sees AI as a necessary path forward for its business, potentially speeding up loan decisions across various products.

BoA launched its cloud efforts in 2012 and since then has reduced the number of on-premises servers from 200,000 down to 70,000 across 23 data centers (down from 60). BoA claims to have reduced infrastructure spending by $2.1 billion annually from 2012 levels. However, it does not state how much it is spending in the cloud.

The next step in this program is to migrate the private cloud workloads over to the public cloud via the IBM partnership. BoA may garner some significant advantages by partnering with IBM on a novel cloud product, as well as providing key insights to the rest of the banking industry that may reduce the hesitation many banks hold towards public cloud adoption.

Other players in the banking sector are taking a different approach by pursuing a multicloud strategy that leverages the best-of-breed functionality across Amazon, Google, and Microsoft’s clouds, plus their own private clouds. JPMorgan Chase and Wells Fargo are among the big banks pursuing this approach. As the chart earlier in this note indicates, only 17% of survey respondents have adopted a multi-public-cloud strategy, though this is viewed as the future default state of cloud deployments. The primary risk of betting on multicloud is the deep level of interoperability required to share data workloads across different cloud environments.

The financial services industry is starting to warm up to public cloud as a viable operating platform, but most are still reluctant to take the plunge and go all-in. Most have settled on a hybrid or private cloud model approach. BoA and Capital One demonstrate other options can yield value that extends far past the current de facto cloud state.

Puzzle Solving for Hybrid-Cloud, Multi-Cloud, and Containers in a Virtual World