Blockchain: Foundational Technology of the Future

The cryptocurrency Bitcoin application was created atop a new technology known as “blockchain” in 2008, by an entity or person(s) known by the pseudonym Satoshi Nakomoto, and marked the birth of a new industry. The primary objective of Bitcoin was to enable and facilitate the transfer and management of cryptocurrencies in a decentralized, anonymous, yet fully traceable and accountable means of commercial exchange. Bitcoin has been the catalyst for the lesser-known underlying technology known as blockchain. The last decade has been tumultuous for cryptocurrencies as well as blockchain, yet signs of maturity are starting to emerge. The R3CEV, LLC is one example. This consortium group of over 70 financial institutions is collaborating to evolve and deploy distributed ledger applications to the broader global markets.

Data indicates that blockchain and cryptocurrencies are here to stay: capital markets applications spending is growing at a CAGR of 52%, projected to reach $400 million by 2019. The investment in Bitcoin and blockchain firms was over $474 million in 2015. Spurred on initially by the rise in popularity of Bitcoin, the real potential lies in the creation of “blockchain platforms” that may revolutionize the financial industry. Impacted areas include database management, trading, transfer of funds, settlement, and smart contracts. 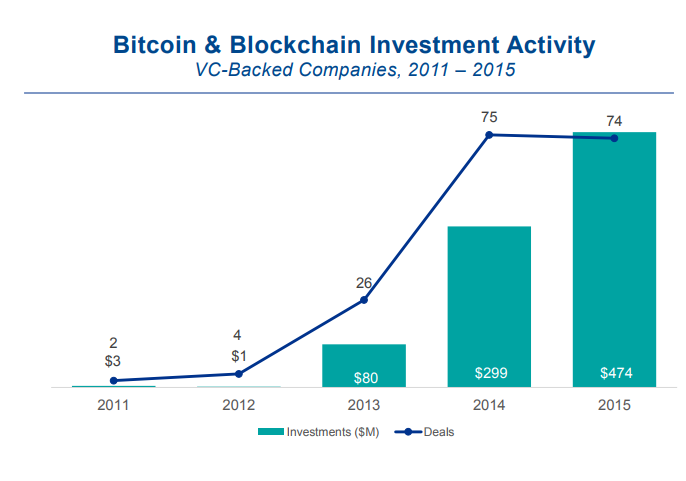 The cryptographically secured distributed ledger technology that underpins blockchain is a game changer providing full transparency, access, and an active role in the maintenance of the database. Blockchain has massive potential to disintermediate the payments and contracts industry; consider the efficiency gains that would result if there were no more middleman or clearinghouse required to facilitate transactions. Santander estimates this disintermediation can cut annual costs for the financial industry by $20 billion by as early as 2022.

Society’s contracts and records are the crux of the economic and legal system, and the glue that holds together the social and political systems through which they are administered. They are integral to the interactions of individuals and diplomacy between nation states. The problem is that these mechanisms are archaic, cumbersome, and struggle to keep pace with the digital movements of today’s current technology.

Blockchain technology is different from the typical disruptive technology movement, in which start-ups seek to secure a majority market share advantage while fencing out competition. Blockchain holds true platform-based potential as a technology, and as such, becomes more valuable as participation in the various blockchain networks increase. As a result, there is as much, or more, collaboration in the blockchain space as there is competition. Blockchain should be thought of as a foundational technology that may replace the current, but archaic, foundations of the economic and social system in the decades ahead.

Blockchain itself is not a product. It is the way that blockchain technology will be utilized by organizations to drive efficiency gains, improve security, and streamline legacy business processes that will determine the eventual leaders in the space. Current investment and use cases for blockchain technology are largely being explored in the financial industry, both by “fintech” start-ups, as well as by large investment and commercial banking and insurance companies.

The 800-pound tech gorillas are not yet diving deep into blockchain, but significant investment is present via the VC market and Initial Coin Offerings (ICO). An ICO is the unregulated fundraising process for newly launched blockchain projects (similar to an IPO, but specific to blockchain) and offers an ownership stake in the project or enterprise. As of August 2017, over 90 ICOs have been completed and they are being launched at a rate of over 20 per month. Currently unregulated, the SEC is actively investigating how ICOs may require regulation as a security. This frenzied activity is illustrated in the fast evolution of cryptocurrency market share over the past year: 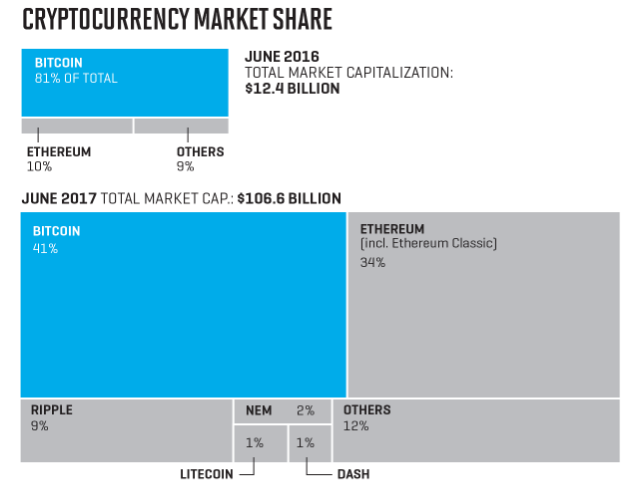 And further in these charts from CB Insights: 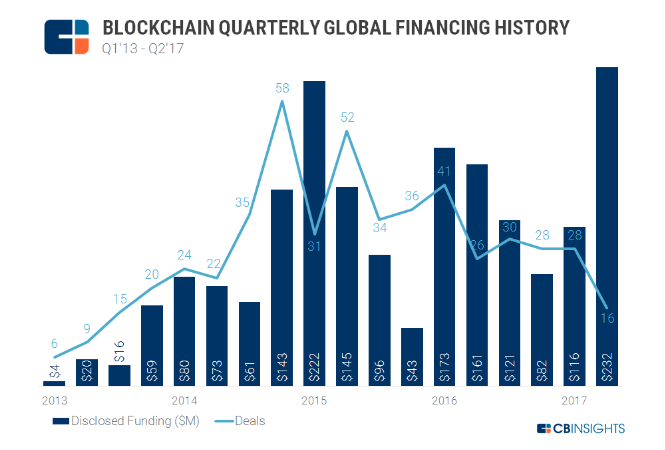 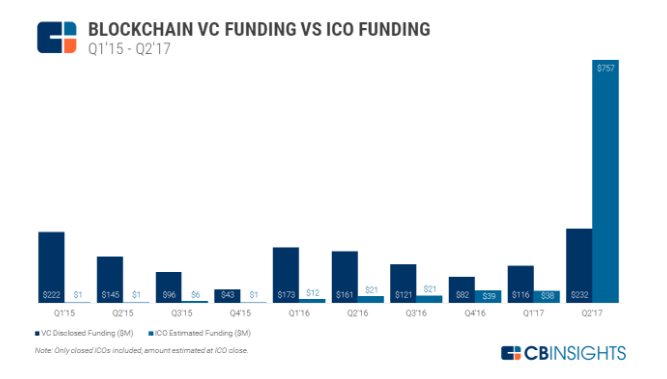 While the FAANG gang (FB, AAPL, AMZN, NFLX, GOOG) are mostly ignoring the blockchain movement, this has opened up opportunities for VC firms seeking an unexploited market that can allow robust start-up growth. For example, one cryptocurrency exchange, Coinbase, has just achieved the acclaimed “unicorn” status with its most recent round of VC funding of $100 million, valuing the company at $1.6 billion. On the fringes for now, there is some activity with MSFT offering an Azure product, Blockchain as a Service, which can host small blockchain start-ups with a customized cloud IaaS. Google is even more on the fringe, opting to limit its market activity to its venture capital arm of businesses.

One blue chip exception in this early stage market is IBM. IBM claims to be working on blockchain technology for “… seven of Europe’s largest banks to facilitate international trade for small and medium-size enterprises.” IBM states that it is already using blockchain internally for financial tracking purposes, the extent of which is not known.

So while big tech may be turning a blind eye to blockchain and the cryptocurrency movement, big banks and investment firms are not. 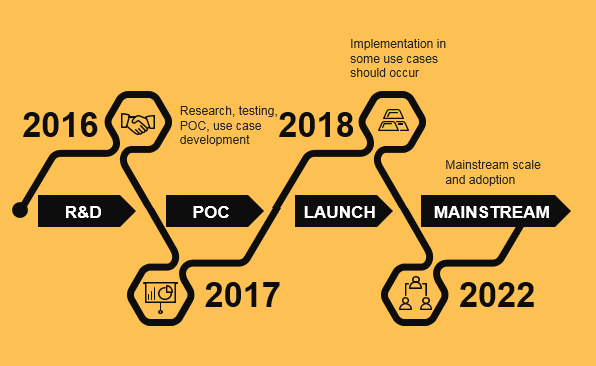 There are two primary categorical advantages that use of blockchain technology and associated networks can provide to its stakeholder community:

Transactions that can be verified using the technology can theoretically displace, or disintermediate, the current “middleman” clearinghouse structures through which financial transactions must be manually verified. Further reduction in overhead can occur as other transactions types are implemented through the blockchain. These processes currently take hours or days, if not longer to complete. In the future, they will be executed in seconds, and security will be simultaneously improved by limiting the number of process touchpoints.


Blockchain engenders a high level of security due to the large number of participants accessing and verifying encrypted data, thus creating an inherent check and balance on each transaction within the system. The fault-tolerant nature of the system allows for the exclusion of malfunctioning or compromised nodes while the overall system remains both functional and secure. Regulators should be able to perform their roles in a streamlined manner due to the transparency and built-in auditability of the blockchain distributed ledger.

The value chain offers unique opportunities to a diverse set of stakeholders. The numerous fintech start-ups emerging in this space are one key group. With deep knowledge of the blockchain space sparse at best, there are compelling opportunities for partnership with legacy financial institutions, providing a win-win synergy of cost reductions for the incumbent players and a VC exit path for the start-ups. Banks working with banks, or interbank blockchain exchanges, offer the promise of streamlined experiences for their collective customer bases with lower amounts of friction and overhead, and thus lower costs. These banks would likely pass some savings on to their customers while retaining a portion to increase profitability.

Cloud providers that offer blockchain services will undoubtedly create a new revenue stream with a long-term total addressable market that is unfathomable. IBM, Amazon, and Microsoft are already launching these services in their respective cloud environments, albeit on a small scale.

But what about that middleman, the infamous clearinghouse (or the lawyer, broker, and banker) of tomorrow? They must engage now if they even want to be a part of the conversation in the future. It is unclear if there is a value proposition for the clearinghouse to play in the blockchain world of tomorrow. If this extinction threat is recognized, it should spur innovation in this space.

There is plenty of hype and media coverage around virtual currencies, such as Bitcoin and Ethereum, but the real transformation is going to take place via the innovative uses of the underlying blockchain technology powering these currency applications. There is potential for commerce at all levels of society to be massively transformed in ways just now being discovered.

The Future of Bitcoin